Well, I'm sittin' here waitin' for Hurricane Mathew to wander through the neighborhood. Got all the supplies laid in and preparations made. And my daughter and youngest grandson got evacuated to my house. My favorite byproduct of all this, is watchin' the loons panic. Spendin' themselves broke on a bunch of stuff they'll never use and will find out later, that they can't return. The King idiots are lined up to buy shotguns.

Ah, the joys of livin' in Sunny Central Florida. Where two thirds of the population is from somewhere else. But at least they serve as entertainment for the locals. And just before Christmas, there'll be lots of never used guns, generators and campin' supplies to be had for ten cents on the dollar.

We'll keep a prayer chain goin' for you and your family's continued safety, buddy.

Firing up the wind manipulator to try and divert the worst of it out to sea, old chum. Hopefully it withstood the corrosive lime dripping from the roof of Niles' old weapons cave so I can fire it up... 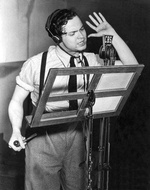 No worries Guys. I'm 60 miles inland and the worst should stay far west of us. Our greatest worry is about losin' power for a few days. Assumin' we don't take a wild tornado in the rear. But I don't live near any trailer parks, so hopefully they'll go "Thataway."

Our greatest worry is my daughter's house. She in her infinite wisdom, lives a hundred yards inland of and seven feet above the water line of Cocoa Beach. She's safe here with us. But her house stands an excellent chance of experiencing a very sudden relocation later tonight.

Well, we survived that one with minimal inconvenience. We never lost power, but cable TV, internet and phone service disappeared for about 18 hours. Happily, my cell service covered most of those needs.

Tomorrow we go over to Cocoa Beach to see how my daughter's house fared.

I hear flapping a bedsheet in the general direction of the hurricane can work wonders. . . . Keep us in the loop, Space, and let us know how your daughter fared with the blowhard known as Matthew.

Maybe Major Anthony Nelson and his Jeannie, who both lived in Cocoa Beach, put a protective bubble over everything.

We're here if you need us for anything, and give all best to your family.
Jeff