Greetings all -- I'll be posting Whistler upgrades for a little while until the Suspense backlog begins (right now it's "zero" which is an odd situation!). There's more than 60 upgrades and different versions since these were last posted at Cobalt. That is, the core set is the OTRR certified set + upgrades posted in previous Cobalt sessions on the prior servers (may they RIP). CompleteDayMan and I managed the big re-org of The Whistler here in 2011 with contributions from many Cobaltians at that time. That effort was to document the many mis-identified and mis-labeled programs and to find the best possible sound. The most important contribution was to specifically identify the different runs that The Whistler had.

Because of the breakup of Standard Oil, there was great legal sentiment against national oil companies and distributors. So, if your program was sponsored by an oil company, it was unlikely for your production to get a national footing. Both the Whistler and Let George Do It had such sponsorship (LGDI's was one of the Standard Oil companies, Chevron). Selling the "balance of the US" to an advertiser (essentially telling a big national advertiser that they could not advertise in fast-growing California) meant that they could not support their western US distributors and dealers, if that was they channel they used to the market, and it meant that their brand could not be associated with a national program. This created a marketing challenge for advertisers, so it is understandable that regional sponsorship was a hard sell for CBS because it was an unattractive idea.

The idea that companies could be limited by law to selling only to certain regions, and that there were big budget programs that only had regional broadcasts can be hard for us to understand today. I remember as a new collector thinking that if it was a regional program and not national, it probably wasn't very good. When you look at the writers, producers, and talent in these programs, that first impression is very wrong. The Whistler may not have been built as a showcase for stars the way Suspense was, but it had radio's best talent behind it.

CBS knew it had a good property in The Whistler, and did its best to find sponsors beyond the CBS Pacific Network. In 1946, The Whistler ran on the other CBS regional network (which we commonly call "East") as a summer replacement series for Jack Carson. From March 1947 to September 1948, Household Finance was as sponsor. The Midwest had its own series from February through December 1946, produced in Chicago (WBBM) in front of a live audience, sponsored by Meister Brau beer. For many years, Whistler collections did not properly identify these many variety of series, so sorting all of that out gave collectors a much better understanding of the history of the series. It is likely some parts of the country could hear multiple versions of The Whistler in the same week depending how good their receivers were and how the weather affected long distance listening. Some newspaper listings reflected this, listing distant stations, which made researching the series confusing for those who were not aware of these different and independent broadcast formats.

Notice how the newspapers picked up the CBS information that promoted the show as being popular on its Pacific network. The first clip is about the Summer 1946 replacement series, the second about the Household Finance series. I think it's fascinating that they had to "explain the show" to the new audience. When you really think about it, The Whistler was quite different than other programs, which helps explain why it is still popular among collectors today. 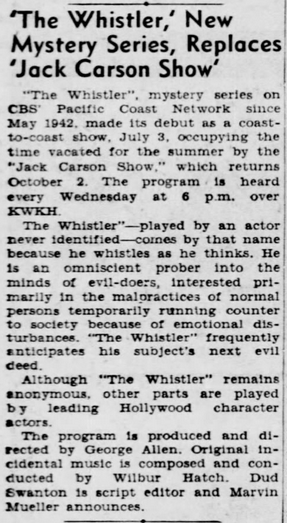 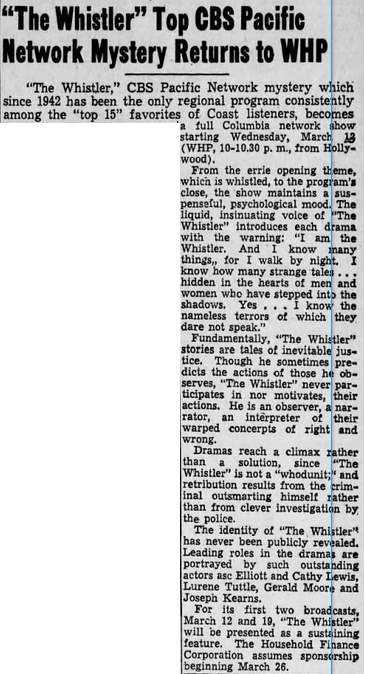 Once Signal's sponsorship ended, the program still did not became national. I am not sure of the dates of Signal's last broadcast. The Signal sponsorship seems to end in Summer 1952, but there are gaps in the available recordings which makes it hard to be certain. CompleteDayMan's notes have details about a national broadcast, after the February 20, 1955 west coast broadcast of Undercurrent:

At this point, the Whistler began to run on the East Coast and in the Midwest as a transcribed show starting on February 24, 1955 with the broadcast of "Bright Boy". The transcribed episode would air three days later, on February 27, 1955 on the West Coast, maintaining its regular night for the remainder of the run. The last broadcast on CBS Net was September 22, 1955 and on the west coast September 25 1955.

The show would run on Sundays in the West, and then transcribed replays on Thursdays in the East and Midwest. In effect, The Whistler never had a period of a national broadcast on the very same day of the week.

The program made it to TV, and many of the episodes exist. Some are in the OTRR set. But many are on YouTube as well [You must be registered and logged in to see this link.] and it is clear that many scripts made the jump from radio to the tube.

There are still many gaps in the series, especially in the non-Pacific broadcasts. The only reason some of the broadcasts of the mid-50s exist is because someone was recording them off the air while they were stationed overseas in military service, or at least it sounds that way. There are many sub-par recordings for this period-- but we'll take them until we can find something else. After September 7, 1952's Secret of Chalk Point, there are about 80 existing recordings of which only 3 are definitely network broadcasts. I still hope that someone out there has a set of the 1970s syndicated episodes which may fill in some gaps or at least fill in with some better sounding recordings.

The series did not have the prominence of Suspense, so newspaper clippings and other coverage of behind-the-scenes intrigue are few, if any. If a Cobaltian can join in with whatever research they can find that would also be appreciated.

In its best years, some shows would attempt to imitate the series, such as the syndicated Diary of Fate (some are okay, others are better than awful) and Dark Venture, and to some extent, The Clock. None of them could execute the concept as well as The Whistler could.

We've got about two months of posts, and this is the first one... enjoy!... and please join in!

Thanks Joe...one of my favorite shows

In the 1970s, the Whistler was syndicated for a while. I listened to them on WRVR-FM in NYC. You can spot them because of the announcements at the end which mention Audio Arts as having the broadcast rights.Though these programs were edited and such rebroadcast syndications are not usually sought by today's collectors, I do remember some reels of these circulating at that time and that they were recorded from the syndication tapes. These have since fallen out of circulation as they were replaced by transcription recordings from network discs. "Completist" that I am, I am seeking these syndication recordings as some may be sound upgrades for episodes that are circulating in bad sound later in the series. Any help is appreciated. I will gladly digitze any of the reels of someone who has these.

Quiet! Hey down in front! Quiet! The doctor is in the house! Okay, okay, go ahead Doc. We're ready, wait a minute hey down in front! Sit down please. The doctor has something to say. Go ahead Doc. We're ready now. Give it all you got......
Guess I got a sugar rush from my bag of M&Ms watching YouTube Whistlers. Thanks for the links and all your hard work to get these shows posted for us.

otrhead wrote:Guess I got a sugar rush from my bag of M&Ms watching YouTube Whistlers.

It's very important to have a balanced diet of a wide variety. That's why M&Ms have so many colors.

greybelt wrote:Whistler 1944-12-11 133 Lie or Consequences (cop shot storyline) UPGRADE.mp3
[You must be registered and logged in to see this link.]

Note that this title is used another time in the series. This is why it is important to include something about the story line in the file name.

Thanks for posting these upgrades. The "Lie or Consequences" episode seems to be the "Christmas Bonus" episode from Dec. 25, 1944 and not the cop shot storyline. Jerry H's log of the series noted that the announcer gives the wrong title.