Posting two shows early as I will be away parts of the next two days...

Suspense_1960-04-10_TwoHorseParlay_wLSudo&EMcCrea UPDATE-3 WROW.mp3
[You must be registered and logged in to see this link.] 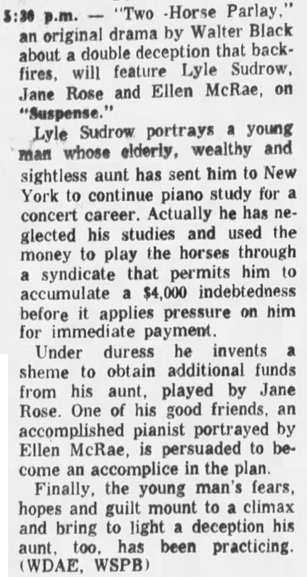 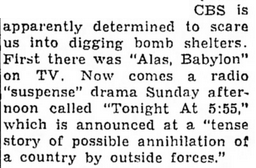 The reference to Alas, Babylon in the review is the TV Playhouse 90
adaptation of the novel that was broadcast on April 3, 1960.
[You must be registered and logged in to see this link.]
THANKS to all for your thoughts and prayers about my mother's medical situation. It is pretty clear that the pneumonia is too strong for whatever they attempt at it, especially in light of her weakened condition. Prayers are always helpful in times as these, but please include gratitude, as I do, for her marvelous and generous caregivers who are great comfort to us and to her.

Suspense_1960-05-08_Legend_Of_Robbie_wLarryRobinson UPGRADE.mp3
[You must be registered and logged in to see this link.]

This Suspense stuff is so much fun -- from the research perspective! Sometimes what you learn is more interesting than some of the shows.

Fall 1958 has always been a challenge for accurate dating, and I think I have it all settled.
All of my notes are in a spreadsheet at [You must be registered and logged in to see this link.]
but this image summarizes the issues. 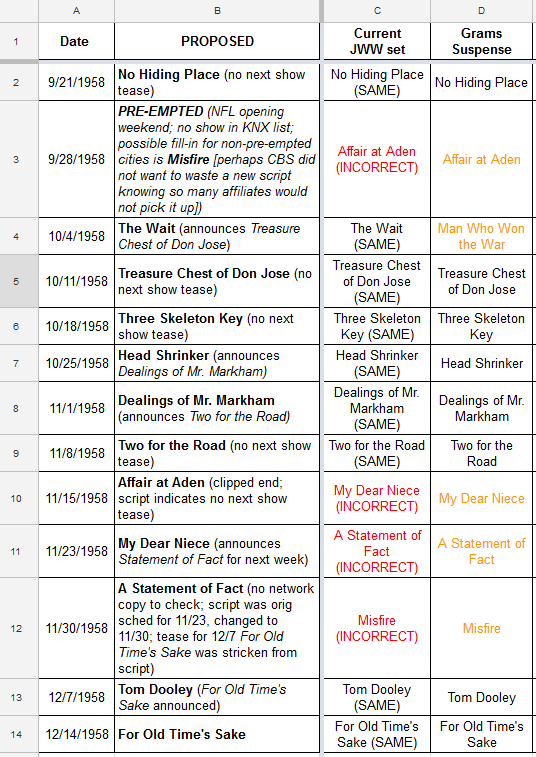 Martin Grams' book, Suspense: Twenty Years of Thrills and Chills is back in print now, through Amazon's on-demand service. [You must be registered and logged in to see this link.] The book is as it was first published; no revisions have been made. He wrote it as a high school project, and the rest is history as he's written about a book a year on average since then. I found it to be very helpful. The dates that he has in the book (column D in the chart) have been replaced by new information that was not available when Martin's book was published in the pre-broadband Internet era.

My collection as it currently stands is in column C. My changes are in column B. The online spreadsheet has columns for other sources and has other notes on it that might be of interest.

The change to the dating of the series in my collection (the basis of the OTRR sets) that I will be making are consistent with those researched and published around 1997 by late collectors Randy Eidemiller and Chris Lambesis, which are also reflected in Jerry Haendiges' log.

It is hard to determine the dates from listening to the existing recordings of this period. Many are AFRS and announcements of the upcoming episode were usually clipped; there are some home recordings, and they are clipped, too (or may have been home recording of the AFRS by a service person or a family member). The next step was to get access to the scripts of the programs in question, and link that with newspaper listings where possible. By this time in the show's history, few newspapers were offering details about specific episodes; they were just listing the series in their radio timetables.

Unfortunately, most of the scripts in this period did not include the announcement of the upcoming show! It seems that for weeks not even Bill Robson knew for certain at the time of broadcast what script would be broadcast the next week. The program was being taped weeks in advance, and there were always multiple programs that had been readied, so he usually had a couple or a few to choose from.

The other problem is that there is no script for Misfire for 1958. The KNX collection at the Thousand Oaks Library does not have a script dated September 28, 1958! There is no known reason why. What they do have is all of the others for the Fall 1958, so Misfire ends up as falling into that date by process of elimination. The current recording of Misfire that is in circulation is no real help: that, too, has a clipped end.

From reviewing the newspapers at that time, September 28 was a pre-emption date for Suspense for much of the country because it was the opening day for the NFL. In some cities, like Chicago, it seems that the broadcast was moved to that night. It is conceivable that with so many affiliates skipping Suspense that weekend that they'd release a repeated script rather than waste an original one that would have only a fraction of its usual audience. So this is the date where it seems to fit best. For a few weeks, Suspense moved to a later time on Saturdays before shifting back. By that later time, the college games were over, and Suspense would be less subject to pre-emption by a sports event.

I have some date revisions / file renaming to do in my collection. The matter of the competing views of the scheduling for this period seems to be settled to my satisfaction until something comes up otherwise.

I'm looking for different copies of Misfire from 1958, but can't find any. The 1957 one has Jack Carson. The 1958 one has Bill Conrad and is usually just under 20 minutes. I have the Conrad version from multiple sources, and they are all the same. If any one has cassettes or reels from the pre-digital era, or has a digital recording that has Conrad but is a different length, please get in contact with me.

Thanks so very much!

SUSPENSE NEWS
This is all very preliminary, but plans are in the works for a Suspense panel discussion at Martin G's Mid-Atlantic Nostalgia Convention in September. I was originally going to discuss Casey, Crime Photographer, but this opportunity was too good to pass up. I will be moderating a panel with Suspense researcher Don Ramlow and the creator of the current Blue Hours Productions Suspense series John C. Alsedek. None of this is official yet, and various logistics and calendars need to fall into place. If you're thinking of going, it will be on the Saturday morning which is usually reserved for OTR with some recreations. I will keep you posted.

Suspense_1960-05-15_Deadman's_Story_wKevinMcCarthy LQ UPGRADE COMPLETE WITH COMMLS.mp3
[You must be registered and logged in to see this link.]

A PERSONAL NOTE: Things seem to be moving with my mother's condition rather quickly as she is being relocated to hospice care, with her doctor indicating she will not last much longer. Thanks for all of your prayers and support. They have been, and continue to be, greatly, greatly appreciated.

Because my schedule will be occupied by these unfolding events, here are some programs to cover these next days. I am not sure when I will be posting again, but it will be as soon as I am able. 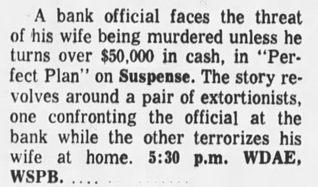 * * * * * * * * *
These are different versions of the same performance, one from AFRS disc and three network recordings from airchecks. One is more complete than the other, and one has the WROW station ID at open. There is another, posted a while ago, that I repost here, that has a rather drawn out Utica Club commercial at the beginning. This is also a WROW recording, probably from the very same source. Details on the Utica Club brand is at [You must be registered and logged in to see this link.]

Suspense_1960-06-05_TwoCameBack_wRobertReadick AFRTS#789 FROM DISC.mp3
[You must be registered and logged in to see this link.]

Suspense_1960-06-05_TwoCameBack_wRobertReadick ENCODE INCREASE -3 COMPLETE.mp3
[You must be registered and logged in to see this link.]

Suspense_1960-06-05_TwoCameBack_wRobertReadick UPGRADE WROW.mp3
[You must be registered and logged in to see this link.]

Suspense_1960-06-05_TwoCameBack_wRobertReadick HAS PRE-SHOW COMMLS.mp3
[You must be registered and logged in to see this link.] 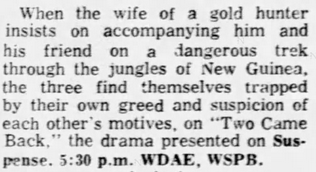 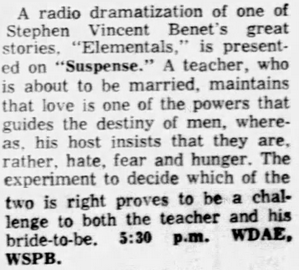 You, your Mom, and the family are in our thoughts and prayers Greybelt.

A personal note at the bottom of this post... but first, here are three programs...

This first program is a nice upgrade, but it was edited down and was missing about 3 minutes of the full program. I have the recording as I received it, and inserted the missing material from another recording that was not as good but good enough. For this reason, I have marked it as "composite." It's important to label "fixed" programs such as these for future collectors who might wonder why the sound is different. Overall, the recording is much better than the one in current circulation.

Suspense_1960-06-19_Sixty_Grand_Missing NICE SOUND LIKELY EDITED VERSION.mp3
[You must be registered and logged in to see this link.]

1960-06-19 Pittsburgh Post-Gazette
Note that the newspaper listing has the title as "mission."
I'm confident it's a typographic error.

1960-06-19 Asheville NC Citizen Times
This listing has the title as announced on the show.

*   *   *   *   *   *   *   *   *   *   *
A personal note: We have had quite the roller coaster this week, and it turns out that Mom forgot about some extra tickets she had so she's extending the ride. On Monday we got a call that things had become dire, so it would be a good idea if we wanted to see her to start that process. The next day, to the doctor's surprise she was the opposite, having some engaged conversation that actually made sense. It was hard to believe it was the same person, but our son, who traveled great distance, was able to have a good visit, much better than a couple of weeks ago, where the fatigue and fuzzy thinking was not really penetrable. So that was an unexpected welcome blessing for that moment of this week. That was much less so the following day, but she is now out of the hospital in skilled nursing, where the infections and other issues will take her in days or weeks in a peaceful manner. In the meantime, my schedule is erratic as we deal with these, and related events, and various duties of daily life. The "high alert" of packed overnight bags by the door and phones on the nightstand is exhausting, but most everyone deals with that at one time or another, and this is our chance.

Having been through your scenario with both my mom and more recently my dad, I understand the intense challenges you're facing, my friend. At times it feels more than one can bear. But your faith and love will sustain you, and the support of all the prayers of those here at the Cobalt and those close to you will help. Be well and we'll continue to storm the gates of Heaven for you and your family.
Jeff
_________________
GHEMRATS
"WRONG! You had Special K with bananas!"

Greybelt, in the recent past, I've lost my mother, my older sister, a cousin who was more like an older brother and just last week, a very dear friend. So, I'm right there with you in heart, mind and spirit.

If we truly love, then we will experience the anguish of the loss of those we love. Their love lives on in each of us. And that love is magnified and continues to grow, within each of those who we love in turn. Love is eternal... love lives on.

Greybelt, we lost my Wife's father, moved into a new house, had a daughter, our second child, and lost my father, within a five month period.

I understand totally what you're going through.

Keep the faith and our prayers are still with you.