American Radio Theater has recreated a missing Mr. District Attorney, The Case of the Misguided Mothers from April 26, 1944 [You must be registered and logged in to see this link.]

Mr. DA was always top-rated, often earning Hooper ratings for audience size that was larger the Suspense, Lux, and others. Unfortunately, very few of the Jay Jostyn series exist compared to the 500-600 episodes he starred in over about 12 years. The Ziv series with David Brian outnumber the Jostyn shows in circulation, and don't convey the authority and force for good and law and order that Jostyn's role commanded. The Ziv series was grittier and often rougher in its tone and its situations, and Brian is almost a bureaucratic bystander.

Jostyn and the supporting cast made the show a favorite throughout the golden age. Because so few of the Jostyn are in circulation, few collectors have been able to develop an appreciation, if not an affection, for the series where good always triumphed over evil, even if the criminals were better behaved than in the Ziv run. After the Ziv syndication, Jostyn came back with the show for a brief run on the Mutual network.

Kudos again to American Radio Theater for their efforts to recreate missing programs of favorite series. 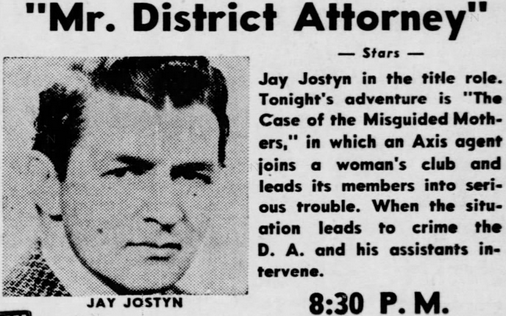 If anyone wants to post Jostyn DA shows on this thread, I've got a great set I can send to a volunteer who can upload to a cloud service and do a show post every day or so.

Jay Jostyn took over the role of Mr. DA when the show moved to a weekly half-hour program. He was a very well-known and highly regarded radio actor. Only a relatively small percentage of his appearances exist in circulation, so he has never garnered much recognition of his work among collectors. He had thousands of radio appearances, especially on soap operas and kids shows that originated in New York, with virtually all of them uncredited.

Click on any image to see a larger version 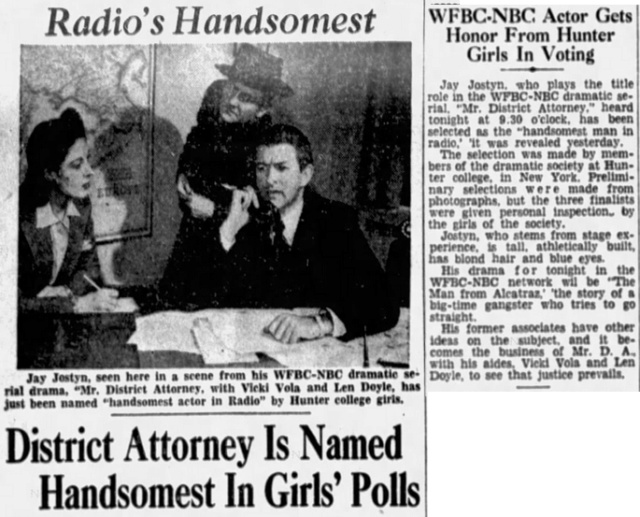 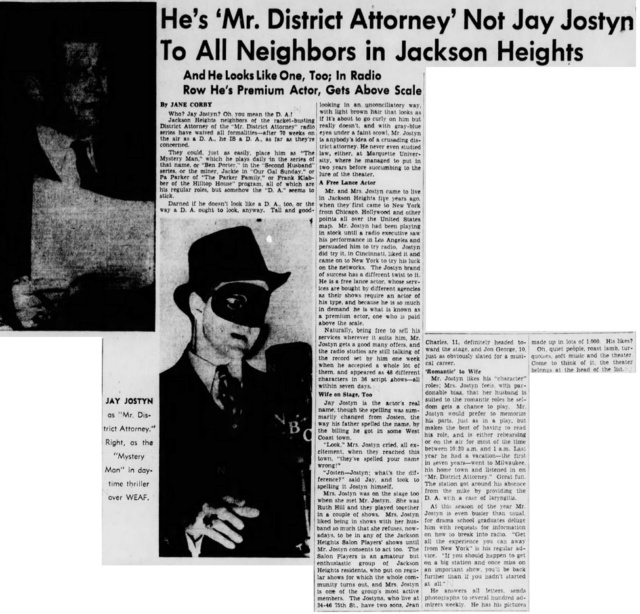 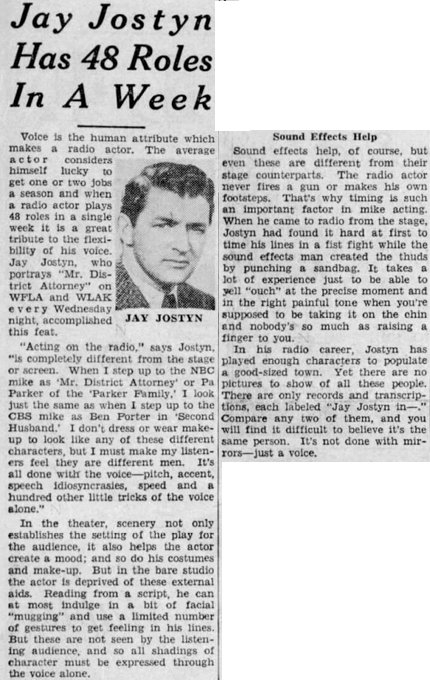 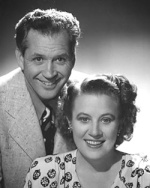 Mr DA 1941-12-10 COT Priceless Miniature (AKA Museum Mystery) (Jostyn; includes his appeal for War Bonds) UPGRADE.mp3
[You must be registered and logged in to see this link.] 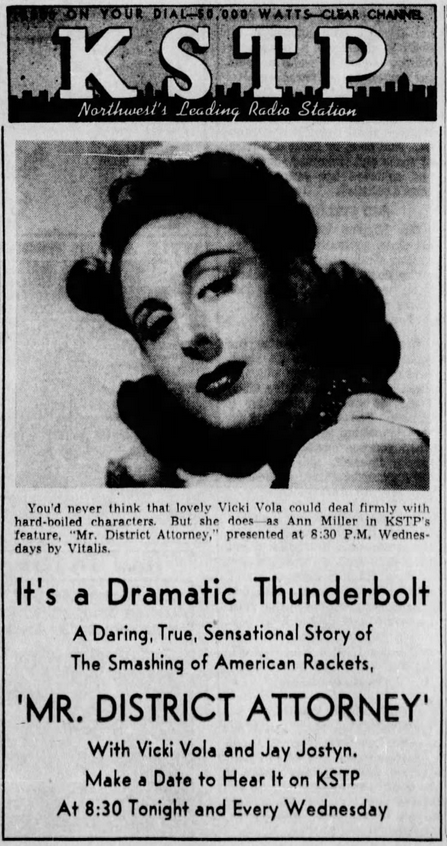 Len Doyle, the actor who plays Harrington, got letters for his character!
1943-03-17 Greenville SC News

The FBI's J. Edgar Hoover was announced to appear on the program. Remember, Jerry Devine became the producer of Mr. DA, and not long after originated This is Your FBI. Perhaps it was working with the FBI and Hoover's staff that the relationship began for TiYFBI. The competing show, FBIiP&W had no such relationship, and was careful to note that.
1943-04-14 Shreveport LA Times

Mr DA was a hot property, so they gave the cast three-year contracts, which was a big deal.
1944-03-27 Circleville OH Herald 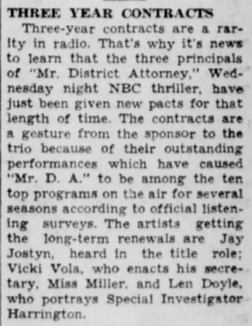 Mr DA 1944-03-29 INCOMPLETE portions of home recorded discs - TCOT Murder for Love.mp3
[You must be registered and logged in to see this link.]

Today's recording is a rare find, parts of a home recording of a missing episode. Home recording discs were expensive, and usually held only about 5-10 minutes of recording. Since most homes only had one recorder, the gap was caused by the time needed to flip a disc to the remaining blank side or to remove the recorded disk and replace it with a new blank. You can still follow a lot of the story... perhaps this news clip can help with the main storyline. With so few Jostyn recordings in circulation, we'll take whatever we can get! 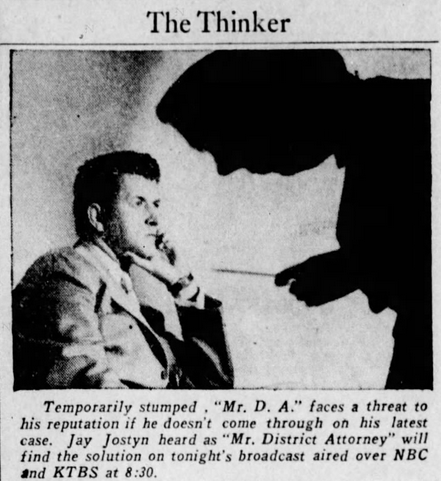 Thanks, kdmarket and greybelt. That home recording is a great find!

Some quick notes -- Geezer points out that the correct date in the file name for yesterday's "Murder for Love" should be March 29. He is correct! I neglected to update the file name when I found the newspaper clips before sharing files with kdmarket, so apologies are in order.

Geez also asked about "430203 Case Of The Backstage Murder" which is in circulation. I have never been able to verify that particular date and at the time when I first researched it the 1943 date seemed very out of place. I do have verification for it as 1944-09-13 with the name "Comical Corpse" which will be the order that is posted by kdmarket. That said, not all of the Mr. DA titles appear in newspapers, and I have found already that the show was running repeats with different episode titles! There is one coming up about a quickie marriages scam for servicemen on leave that is clearly a repeat from an earlier episode. Whatever the Backstage or Comical Corpse file is, it's coming up shortly and perhaps we can get the date more solidly researched in the meantime. Nothing ever gets by The Geez, who has been a stalwart Cobaltian of the highest order and has helped clean up lots of series -- I'm thankful he's here and assisted me many many times.

Today's title of "Curious Undertakers" seems strange, but from listening to the program (what!??) the fact it has a graveyard element to it that fits the newspaper description. That, and I was able to find clips for every show from 1943-early 1945 that did not fit also made it a process of elimination verification. This is sometimes in circulation as a description, not a title, that includes phrases like "eccentric ladies" and "crooked lawyer" or something like that. 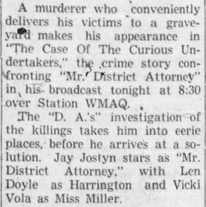 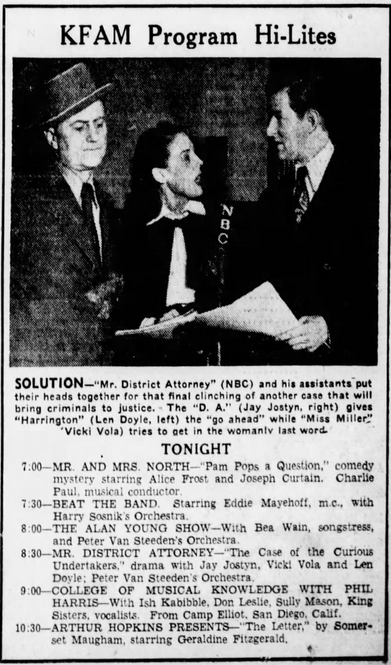 Mr DA 1944-08-23 COT Intimidated Jury (Jostyn) (AKA Mr Stanley's Fixed Jury, Thieves Fall Out).mp3
[You must be registered and logged in to see this link.]