Thanks again! According to my updated episode log, The Hidden Money Killer is probably episode 34.

I can't say for sure what episode number this one might be. It doesn't fit the remaining titles very well. The only one I thought it might fit would be episode 33 "The Dancing Killer," but only because the killer was trying to force a lady to dance at the beginning of the episode, although they didn't actually dance.

Not to change my mind on this one, but upon thinking through the plot of this episode further, I thought that episode 7 "The Telephone Tenants" might also fit, just because of the bookies' approach to using others' telephones. So, on that reasoning, it could be either Episode 7 or Episode 10. That's the problem when we just have title names with no plot description to help us match these.

I just wanted to send a quick thanks to kdmarket for posting all the links to the episodes. Also a big thanks to mjnunes84 for all his research work.

When I combined the files Greybelt provided with my own set, the first thing I was happy to find was that the episode numbers(generally) matched up. Since we had various sources, the match ups added some weight to the belief that the numbers were correct. In addition to solidifying that opinion, MJ's work came up with likely titles and numbers for the half dozen "open" slots.

Here's hoping that complete versions of the 6 episodes show up either as syndicated disks or in script form. Regardless, thanks again to KD, MJ and Greybelt for making the series as complete and accurate as possible and presenting it here at the good old Cobalt Club

Yes, much appreciated....I can't believe this show kind of escaped my radar all these years...I really enjoy it....

As you've seen from greybelt's previous posts, the Jay Jostyn series had one last short run in late 1953, with the final broadcast on December 20, 1953. Shortly after, Ziv bought the TV and Radio rights to Mr. D.A.

As you'll see in this first clipping, even in late 1953 Ziv was apparently making preparations for production of the Mr. D.A. TV series before the deal was official: 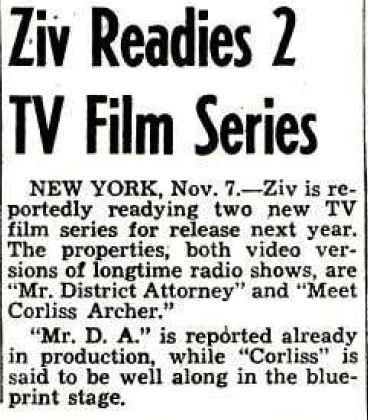 At the beginning of February, Ziv finalized the deal to buy the TV & Radio rights to Mr. D.A. for $250,000. Thanks to greybelt for the following clipping: 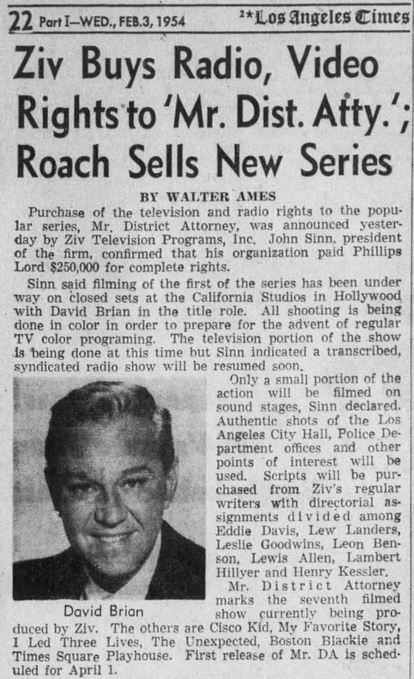 Here's an additional clipping from Billboard about the deal:

I find it interesting that the series was filmed in color, despite mostly being broadcast in black and white. The TV series ended up premiering at the beginning of April, and it ran for 2 seasons for a total of 78 episodes.

It was not until later in 1954 that the David Brian radio Mr. D.A. began, with the news announcements about the radio revival coming in late July: 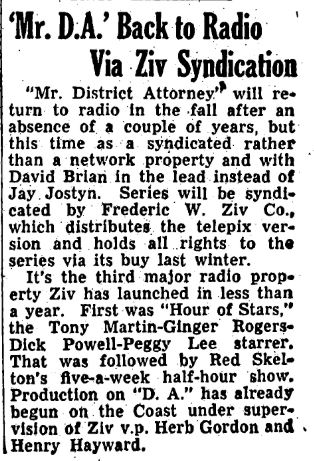 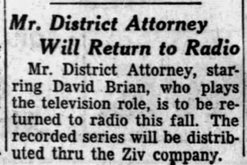 Here's another one from Billboard:

Over the next month or so, Billboard continued to report the increasing sales of the Ziv syndicated Mr. D.A. series: 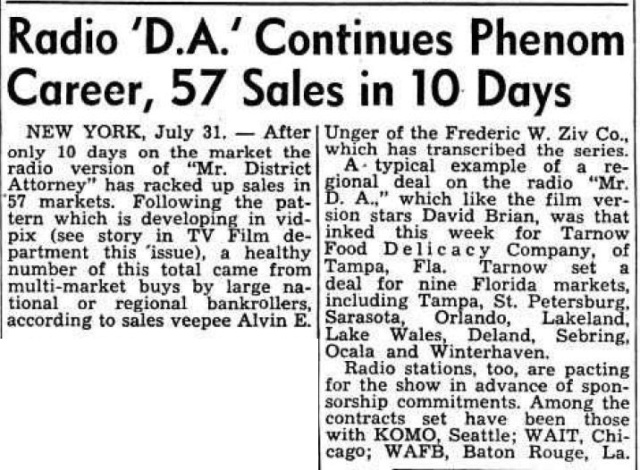 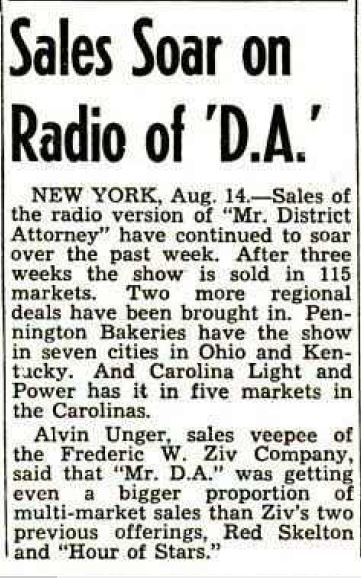 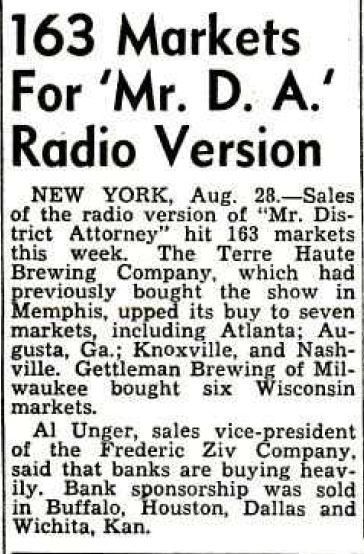 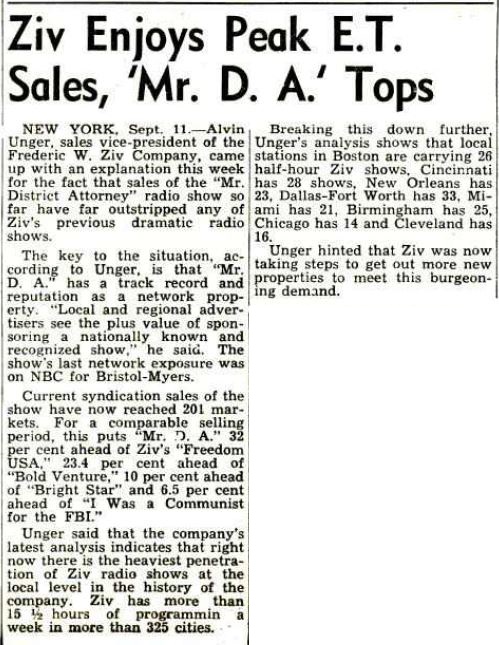 Greybelt found this clipping with some comments about the new David Brian series: 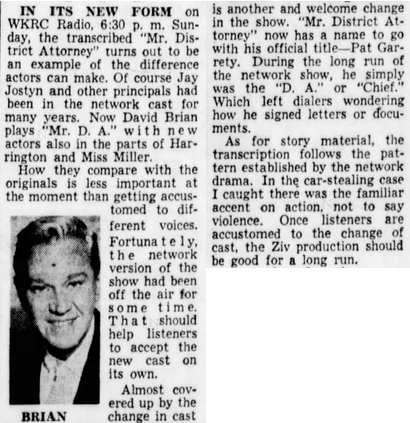 I hope this helps out with our understanding of the beginnings of the David Brian radio Mr. D.A. series. I posted an updated radio log for his series earlier. Since this was a syndicated series, being broadcast on different days on different stations, with some stations picking up the series later than others, we can't really list accurate broadcast dates for the David Brian series. However, I think some of the clippings above at least help us see that it began on some stations in the Fall of 1954, and so 1954-1955 would be a more accurate dating of the series.

I have some additional research on Mr. D.A. to share later, so stay tuned.

That is all a significant contribution to our understanding of the series. Perhaps others in Cobaltia can help in doing the same for some of the other series. It's astonishing what can be learned with all of the new online resources, many of which are available at no charge through libraries, even at home with online library accounts. Just doing a little research every day starts to add up!

The Brian series has been subject of so much misinformation for decades, dispelling the myths and correcting the errors is a great gift to OTRdom today and to future collectors.

These first two are related to a public relations appearance in Cincinnati and the television show.
1954-08-12 Cincinnati OH Enquirer 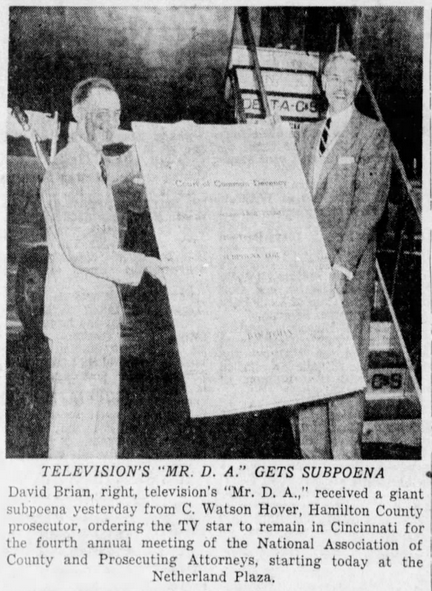 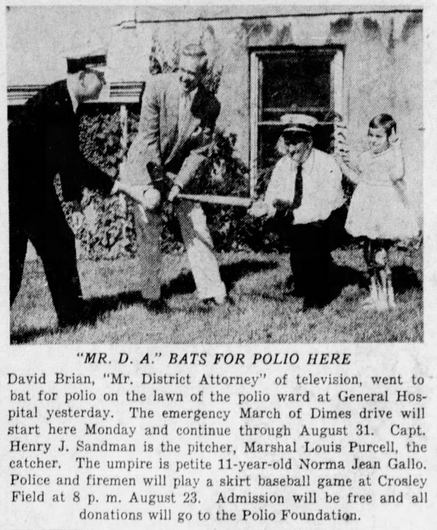 And this item announces the beginning of the Brian Mr. District Attorney series on radio. 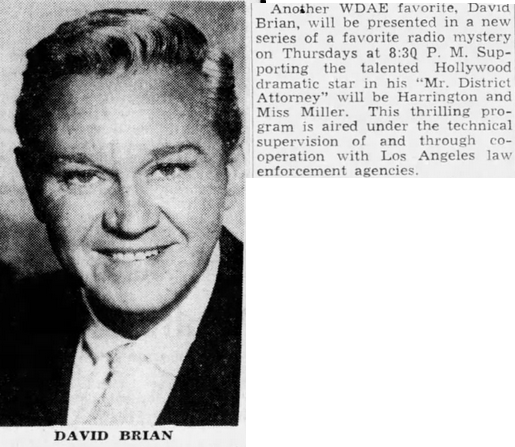 I just want to say thank you for this tremendous collection. I don't often get to join in when the shows are being posted because I save them up till I have a gap in listening. I hadn't heard this show before and I have just started listening to the Jay Jostyn episodes posted at the end of last year and I'm really enjoying them. They're great little stories where justice always prevails!

While doing some unrelated research, I just stumbled across this incomplete home recording of a Mr. District Attorney program. It was just posted a few days ago on Youtube:

Thanks, mjnunes84. Has anyone identified this program yet?

"Another encouraging note, the communist order for a general strike in France has fallen flat on its face.  Only several thousand members of the general confederation..." suggests 1952-05-30+. (Image 2)

- An active crook and an ex femme mob moll who has become a board housewife combine to scheme new crimes, "Mr. District Attorney." KECA at 9:30.  {"Listening Post and TV Review," Valley Times [Hollywood, California], February 29, 1952.}
- When two old chronies [sic] get together to talk over old days of crime, Mr. District Attorney will smell double trouble in "The Case of a Word to the Wise." (9:30 p.m., WISH-ABC).  {"Radio-TV Highlights: Also on the Air," The Indianapolis Star [Indianapolis, Indiana], February 29, 1952.}
- Two former gang pals team up in an unusual game of homicide for gain, in "The Case of a Word to the Wise" on tonight's Mr. District Attorney broadcast (WSUN, 9:30 p.m)  {"Radio Programs," The Tampa Daily Times [Tampa, Florida], May 30, 1952.}

Nice work! Thanks for figuring out the probable date and title for that!

SURPRISE! Just a couple of Mr DA posts with some new Jostyn shows....

But first -- I processed the fragment found on YouTube and got out some of that awful noise. It's less worse...
Mr DA 1952-05-30 TCO a Word to the Wise WJOI Florence- AL (8m excerpt+news) FINAL.mp3
[You must be registered and logged in to see this link.] 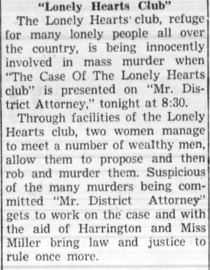 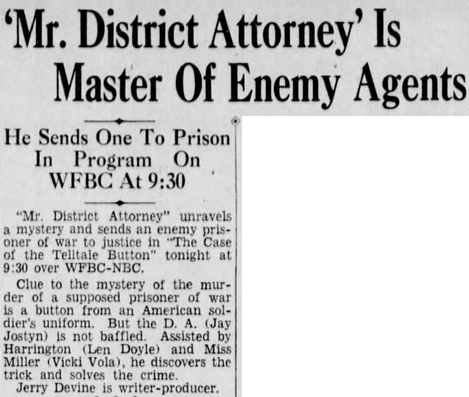 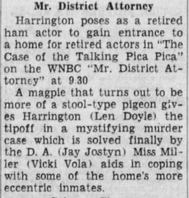 * * * * * * * * * * * * * * * * * * * * * * * *
Cobaltia: please support the effort to bring more attention to the real "Mr. District Attorney" on radio, Jay Jostyn. Despite his having the role for more than 10 years, and well over 600, if not 700, episodes, much of OTRdom is more familiar with the Ziv series with David Brian because of the number of recordings that have survived in comparison. (Note the recent Radio Spirits set, which perpetuates the misdating of the Brian series that was corrected on this thread, a major contribution to research about the series).

If you're not familiar with Mr. DA, please go back through this thread as see newspaper clips and other items that show the popularity of the program and its role in the culture of the time. Then help remind new collectors, especially, of the importance of this part of the series' history.

This is the list of Jostyn episodes that have survived and have now been posted on this thread:

Mr DA RECREATION 1944-04-26 COT Misguided Mothers.mp3  (recreation by American Radio Theater; this was a Jostyn script but they used Ziv bridges in the recreation) [You must be registered and logged in to see this link.]

RadioGoldindex also lists these episodes that I have not yet found in circulation:

68148. Mr. District Attorney. July 9, 1941. NBC net. "The Case Of The Man In Black". Sponsored by: Vitalis. A doctor reports that a strange "man in black" has been hanging around the house of Carla Collins, his wealthy and glamorous patient. A flask of acid is thrown in the doctor's face...and then he's stabbed by "the man in black." Jay Jostyn, Len Doyle, Vicki Vola, Finnis Farr (writer), Kaye Brinker, Phillips H. Lord (creator). 29:44. Audio condition: Excellent. Complete.

Hello OTR friends, does anyone have a nice set of the Jostyna-era Mr. District Attorney in either WAV of FLAC format? Cheers!