Mr Goldin indicates that he has more and if he does, maybe someone else has them too -- maybe even someone at the good ol Cobalt Club. So check you sock drawers for old cassettes. Here's some plot info from his log on what's out there:

Program #39.  Oliver has a difference of opinion with Schultz, the butcher. It seems a $5 bill was really a $1 bill...or vice versa

Program #40.  Oliver Anderson vs. "The Masked Terror" in a wrestling match.

Program #41.  Junior has been collecting bottles for their deposits. Implausibly, this leads to Oliver's boss conclude that he's a drunk! Everyone ends up at the police station

Program #42. Mr. Anderson has to sell a bunch of "flat-top" stoves and decides to do it on the radio. Despite the usual silly plot, the story is all about small-time radio and a balky transmitter.

Program #43. The floor in the bedroom is slanted and needs work. Mr. Anderson tries to get the job done on the cheap. Homer Meister says he can do the job; and he can...sort of.

Program #44. . A neighbor asks Junior to fill his bicycle tire with air, which promptly explodes. The complications are considerable.

Program #46. Oliver is told to bid on scrap streetcar rails for the stove factory.

Program #47. Oliver Anderson gets a letter from an old girlfriend about their meeting last night, when Oliver was supposed to be bowling. Strangely enough, Homer gets a letter the same day, offering him a job in Brazil

Program #48.  Oliver Anderson has written a column for the newspaper's anniversary edition. It has none of the news that's fit to print!

Program #49.. There are rumors circulating that Oliver Anderson and his neighbor Homer have come into money...lots of money

No information on Programs 51 and 52 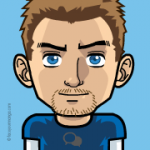 Thank you for organizing and posting this series Geezer.