I am a huge fan of this series. Anyone else into it?

Phil Spitalny and his all girl orchestra? Oh Man. Evelyn and her Magic Violin and the Great opening during WW II

I'm giving you a plus vote for just bring it up

I'm with you and the JazzMan.

In 1934, Phil Spitalny decided to try something completely new - an all-girl orchestra and chorus of 30 musicians. On May 18, 1934 the Hour Of Charm was born as the group started off a short run of weekly 15 min programs on CBS. Another couple of 15 min runs on CBS followed in 1935 and the early part of 1936, but it wasn't until General Electric picked up the sponsorship and changed the format to a 30 minute show of popular and classically based numbers that the show took off. GE decided upon the Red Network of NBC as its delivery vehicle and on November 2, 1936 the first show in this format aired coast to coast on the Red network at 4 p.m. eastern.

I don't have any of the 15 min shows, nor do I know if any are circulating. I also don't yet know the specific date of this first show. I do know that the time of airing changed to 9:30 p.m. eastern on Apr 26, 1937 so since there are multiple references to 4 p.m. in this show, it must have aired between Nov 2 1936 and April 19, 1937. I am now going to scan the papers to see if I can find any specific mention of numbers played. I plan on posting two of these shows every day. If anyone has any better sounding and / or missing shows as we go along, I'd request that you post them.

There now follows a five year gap in my holdings until the broadcast on the fateful night of Dec 7, 1941. This is the first HOC I ever heard and I found it fascinating. Although I have searched and searched I haven't been able to find a better copy yet. I know it's out there somewhere.

Thank you CDM! I am aboard for this as well. I have never heard any of these before although i have heard of them for years. Sad that so many seem to be lost.
- Harlow

Here is a link to several of the film shorts that they made in case anyone would like to see Phil and the ladies perform, Including Evelyn and Her magic Violin!

Yes, they were extremely talented, playing instruments, singing and dancing. When he started, everyone in the industry advised Spitalny against doing it, but he persisted and the group became a major success over the years.

The program underwent a few day / time changes in the late 30s but by September 17, 1939 it had settled on Sundays, where it remained throughout wartime until it ended its run on NBC and changed its name on September 1, 1946. More about that later.

By 1941 the group had swelled to 40 and the advent of war elsewhere brought a boost to the show, with its focus on previous, more pleasant times and the group toured military camps around the country. Following the Japanese attack on Pearl Harbor and the entry of the US into WW2, the program became even more popular with an emphasis now on patriotic and military songs as well as the old favorites and by early 1942, the War Department had chosen it as one of its main stream programs. When AFRS came into existance, it followed the trend and most of the remaining shows that I have are AFRS.

This next one is a show from Fort Monmouth, NJ on behalf of the Signal Corps.

Although they were two different genres of music altogether, Spitalny and his group were to popular / classical what Ina Ray Hutton was to big band. Ina Ray conducted a men's band as well as her famous all-girl band at the height of big band popularity. She was told neither would work yet she proved all her detractors wrong.

This next one is from Flag Day, 1943. Well at least most of it is. AFRS engineers had a maddening habit around this time for combining music from multiple shows and I believe they did something similar to this one. As can be seen from the newspaper clip, poet Edgar Guest is supposed to be on the show but isn't.

Hour Of Charm 1943-06-13 AFRS 009 Special Flag Day Program - dedicated to Fort Columbia, WA
[You must be registered and logged in to see this link.] 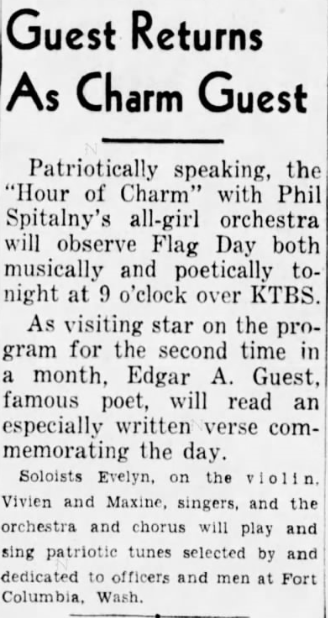 When AFRS first started processing shows, they quite often would select previously broadcast network shows for the first few and assign them AFRS numbers that did not necessarily match the network broadcasting sequence. The AFRS numbers on these files, unless otherwise noted, are what came with the file as I do not have the original discs. I have used newspaper clips, when available, to verify the dates.

I have skipped two files which are dated next in sequence but obviously aren't, and will continue researching until I can verify them. Next up is a show from the second week of a weeks long war bond drive that featured weekly winners as well as a grand prize winner of $5,000 in the final week:

Hour Of Charm 1943-08-29 AFRS 020 A Salute to Rudolph Friml - March Of The Musketeers (War Bond Concert)
[You must be registered and logged in to see this link.] 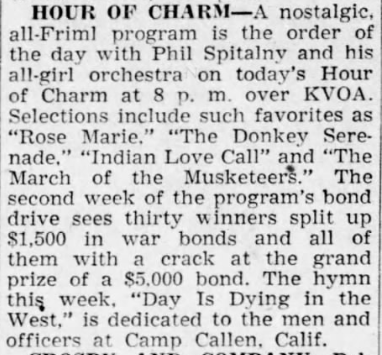 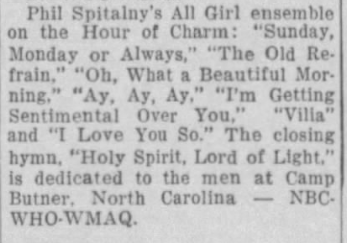 I second the Motion

As the war effort picked up steam, 1943 became a very busy year for the Hour of Charm entourage and the choir grew to forty and then fifty voices at times, depending on the occasion. Although based at Radio City, the group travelled extensively throughout the country performing concerts at and some broadcasts from military camps and other war related sites. There was even time for an eight week stint on Broadway which was very successful. Not only were they good singers, they were good dressers also and violinist Evelyn captured the title of best dressed radio personality of 1943 along the way. It is also noticeable as you listen to the programs that the ladies all went by first names on the show. It started out that way and then became a tradition. It is also worth mentioning that most of the programs now contain a hymn and dedication at the end. Once started, this hit a nostalgia nerve and became very popular with the service men and women. 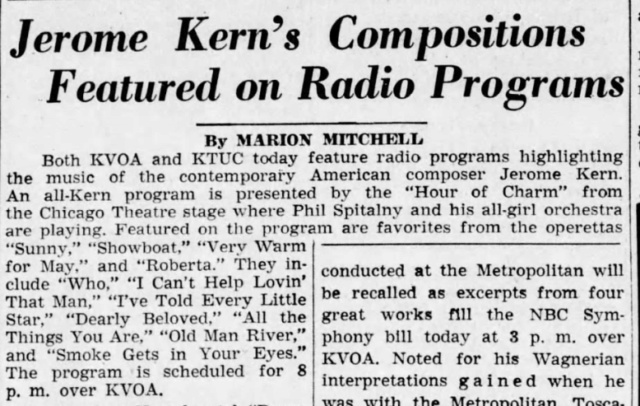 Even though I'm only posting one newspaper clip for these, I'm verifying based upon multiple references, not just one. As we all know, paper refs are not always accurate.

This is either Hour of Charm (?AFRS?) 28  or Hour of Charm 08-13-44 or maybe even something else, because I'm not sure that the sleeve this came in matches the program. At any rate I hope this is an upgrade for you 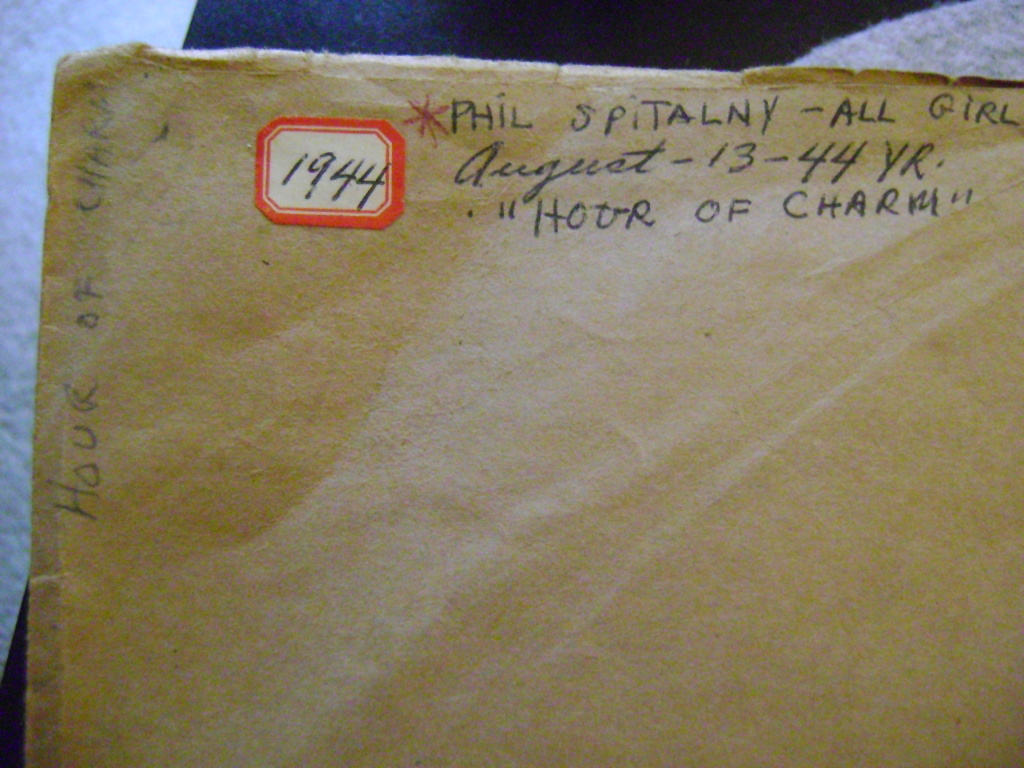 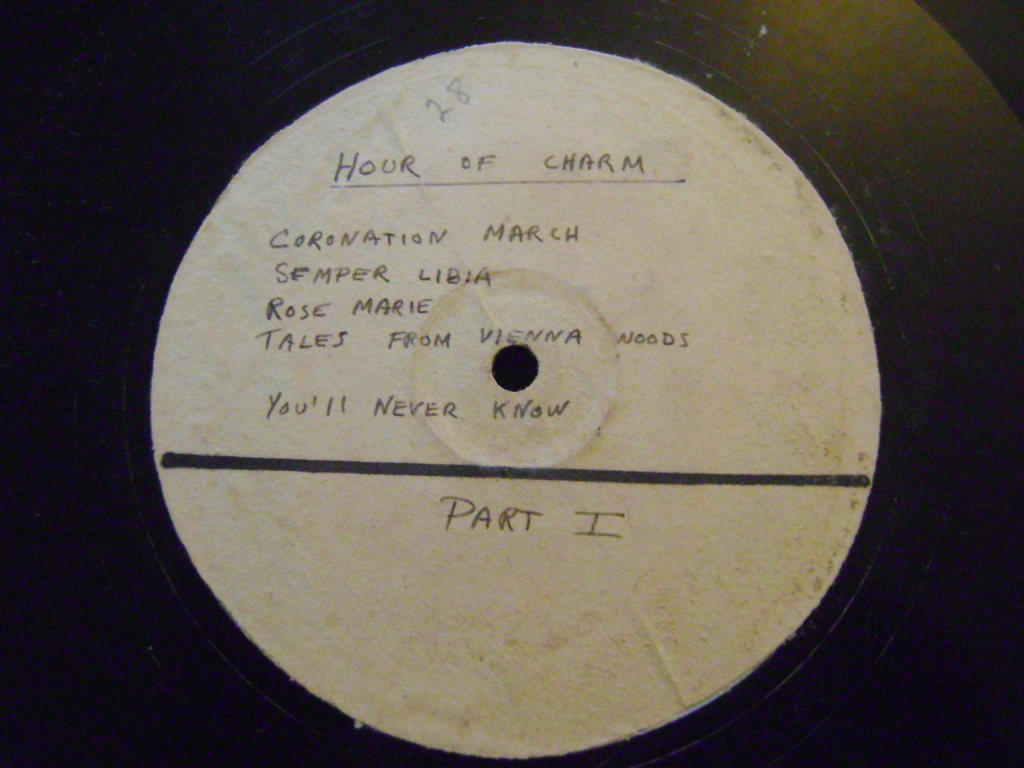 Hour of Charm 28
[You must be registered and logged in to see this link.]

Thank you very much. This is definitely from Aug 13, 1944 but I have no idea where AFRS 28 came from. AFRS #s at this time had settled down to match network broadcasts and this should be #70 or perhaps 71. Great sound though - thank you again Jazzman.

Just noticed. Dave Goldin lists it as #71, which seems to me to be about right. I assume he had the disc.

renamed - thanks for clarifying

Today I'm going to post the last verified show I have for 1943 plus two that I have not yet been able to place. I'll 'splain as we go along.

First up is the last show of the year which it turns out was an all request show.

These next two were labeled AFRS 22 and AFRS 23 respectively and David Goldin lists them both with "date is approximate" notations.

I have now documented just about every show in 1943 from newspaper listings using references that appeared in multiple papers only. (not 100% accurate but close) and I have not found any references to either the content or sequences of them. The main fact is that they appear to be from AFRS 22 & 23 discs.

To me that means one of the following 4 things (there may be others):
1. Newspaper refs are incorrect and the show content changed.
2. AFRS 'assembled' the show from other previously broadcast shows. (they did this in other series). In this case the opening and closing numbers could be used as a help in verification but I've so far found no ref in either case.
3. AFRS took the shows from earlier broadcasts, perhaps in 1942 which I haven't looked at yet. (they did this in other series). This would not apply in the case of UN on the March as I believe this wasn't written by Shostakovich until 1943.
4. Just like the show Jazzman posted yesterday, the AFRS #s could be incorrect and the shows are from 1944 or later. This would not on the surface appear to be valid as it is highly likely Goldin had the discs.

Moving on to 1944 now, and before we start these, I should point out that there appears to be a one number disparity in the AFRS # at this stage. I'll just leave them as they are as I'm verifying based upon the date. 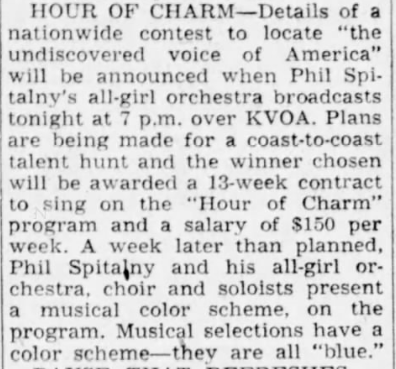 This next one is listed as #42 by Dave Goldin, with this date. He also states it's a tribute to Victor Herbert. However as you can see from the listings and hear on this recording, that is not the case. I have the second half of #42 on a test pressing disc which I will post tomorrow. It is the Victor Herbert show but the papers show the date of broadcast as Jan 30.
You pays your money you takes your choice!

I'll take that date and raise you one. Thank you for the research and materials.