Newspaper clippings were posted previously; these are new to the collection...

This pair of episodes were adapted from the scripts used for the Suspense television series on March 18 & 25, 1952; kinescopes of the TV production have not been found. No AFRS recordings have been located for these episodes.

If you’re not familiar with the story and the history of this, Dickens last but unfinished novel, more details are at [You must be registered and logged in to see this link.]
The Suspense television series presentation is not mentioned, but the radio one is. The TV presentation starred John Baragrey, and it had very little press coverage at the time of its broadcast. 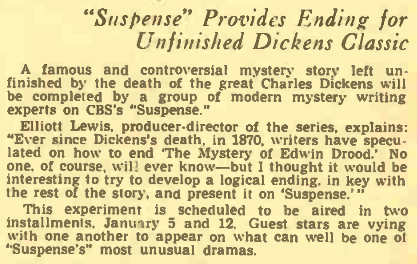 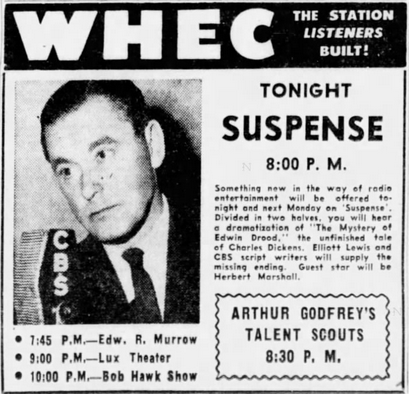 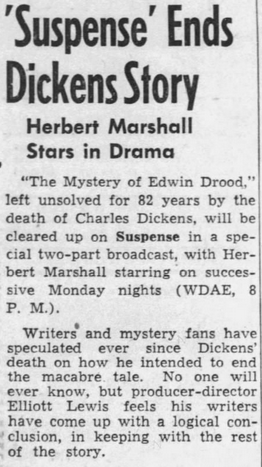 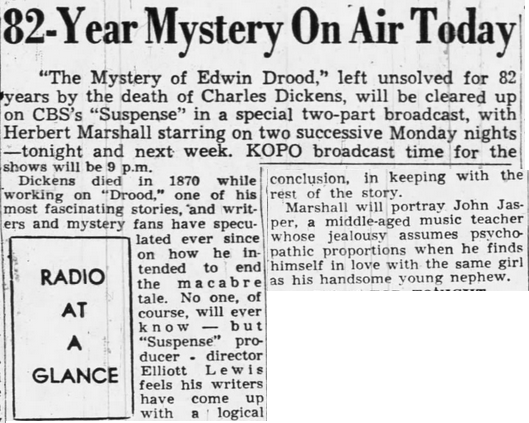 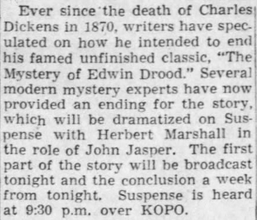 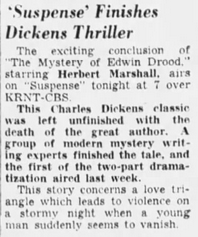 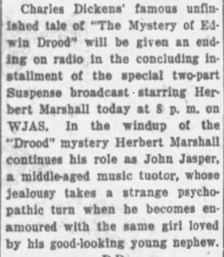 This recording was last upgraded two years ago. No AFRS recording has surfaced.

The AFRS version was posted almost four years ago, and it had a different name! It may not have been intended, but the residue of some AFRS production editing.
Suspense_1953-02-02_Plan_X_wJackBenny (AFRS announced as Strange Disappearance of XY272B) dropout at 12s.mp3
[You must be registered and logged in to see this link.]

This image shows where the AFRS title came from... 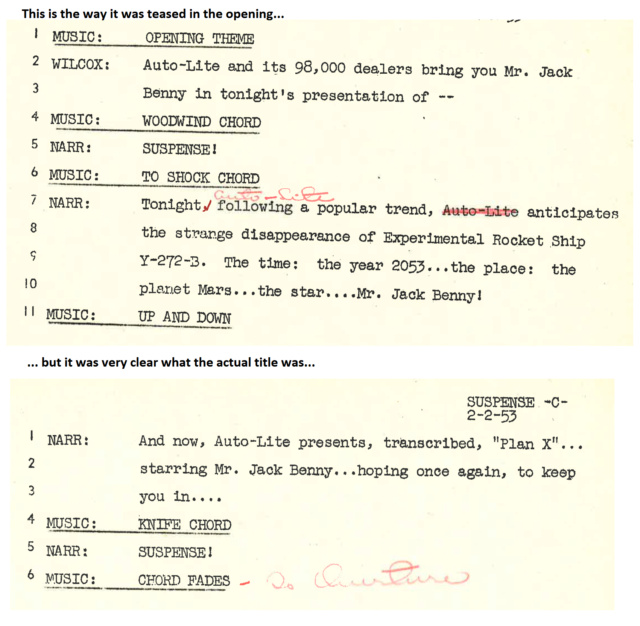 Newspaper clippings were posted previously; the following are new...

We know Lewis had quite a sense of humor, especially heard in his portrayal of Remley on The Phil Harris & Alice Faye Show. And, we know that Spier ran loose rehearsals because he could count on the ensemble cast to get the performance right at dress rehearsal and the broadcasts. Knowing that tradition, and that Lewis was mentored in the Spier years, with the participation of radio's legendary straight man of comedy as the star of the week, what else could be expected for the rehearsals of this episode? The CBS PR folks were likely made aware they should be on hand for the first rehearsal.
1953-01-31 Hackensack NJ Record 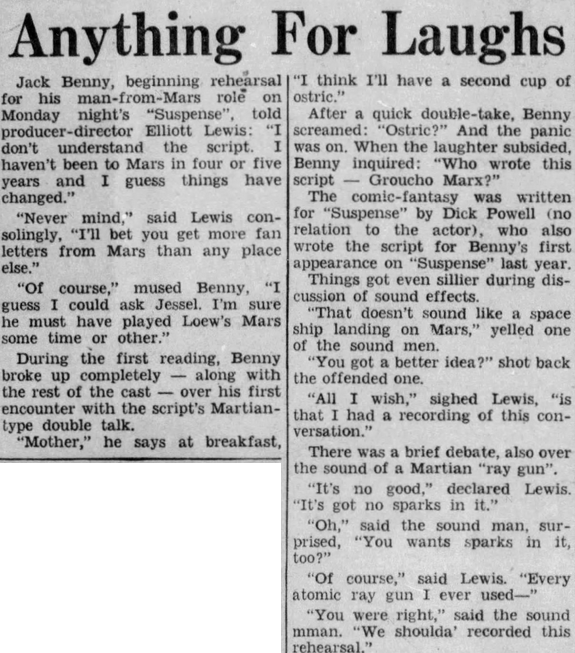 Lewis was extraordinarily creative and talented, and pushed the bounds of Suspense. He implemented the theme of dramas with historical connections to differentiate the series from others, and from growing television competition. Sometimes, the shows would just fall flat. That's the risk anyone takes with experimentation and changing a show's formula. Seeing this little comment in this newspaper clip is a reminder that listeners of this period of the series may have felt the same way.
1953-01-31 Ottawa ON Journal 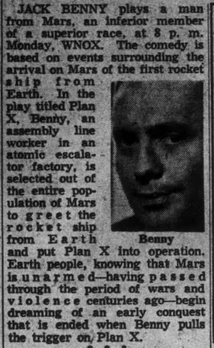 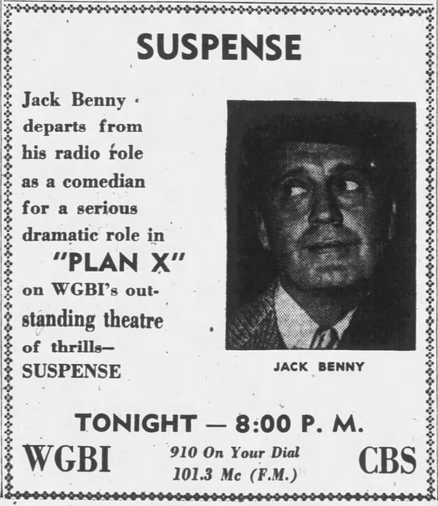 The last upgrade of today's episode was more that 18 months ago. No AFRS recording has surfaced.

Newspaper clippings were posted previously, along with news reports of the original road race. They are at [You must be registered and logged in to see this link.]

This episode has not been updated in more than seven years. No AFRS recording has surfaced. If these are truly different recordings, one of them is an aircheck. The other may be the same recording with the time tone edited off. Your opinions appreciated! 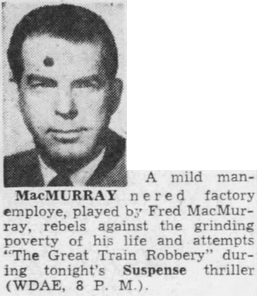 Today's episode has not been updated for 9 years! No AFRS recording has surfaced. 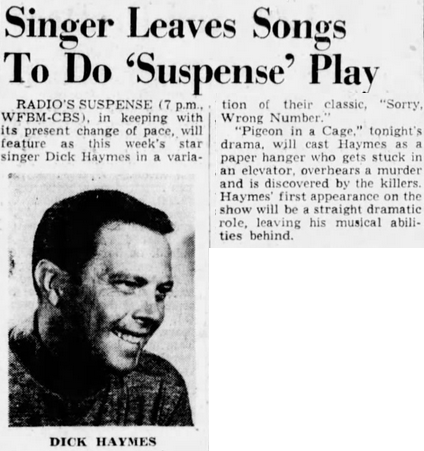 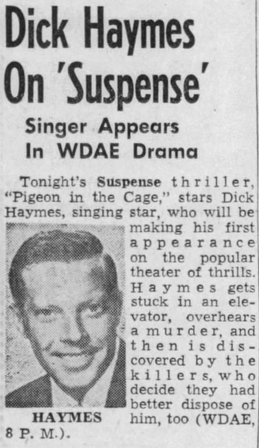 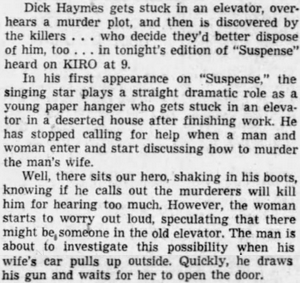 The last upgrade to this episode was two years ago. No AFRS recording has been located.

The episode is based on the 1899 story about how President McKinley needed to get a message to General Calixto Garcia, a leader of the Cuban insurgents prior to the Spanish-American War.
[You must be registered and logged in to see this link.]

Widmark recieves the "Golden Mike" award for 1952's How Long is the Night. You may wonder... what is a "golden mike"? It was just for Suspense guest stars, and done to promote the series by CBS.

This episode has not been upgraded for more that 6 years. No AFRS recording has been found.

This is a re-used Escape script. Billboard reported 40 stations between Washington DC to Michigan had problems with the network feed at the end of the program. CBS offered to send mimeographed summaries to listeners who requested it. Radio critic Magee Adams, writing in the October 19, 1953 Cincinnati Enquirer thought that was a great idea. 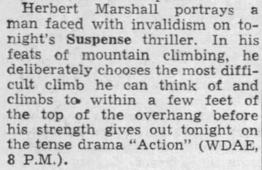 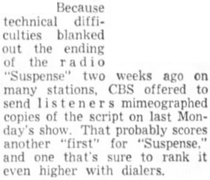 Today's episode has not been updated for more than 9 years. There is no AFRS recording in circulation.

Wilcox flubs Jeff Chandler's name at the opening, calling him "Jeff Alexander." Alexander was a music director at CBS for Hollywood Star Playhouse and other shows, including Amos 'n' Andy. His choir also supplied backup vocals, with full credit, for many Mario Lanza and Frank Sinatra performances and recordings of that time. Wilcox had been announcing the AnA show for years, so Alexander was a very familiar fellow performer. Wilcox said his name most every week there and possibly other programs, and Wilcox just slipped! It's very hard to find recordings of Wilcox flubs... he was one of radio's most dependable announcing pros.

This is the sixth Suspense "musical." 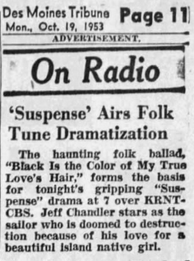 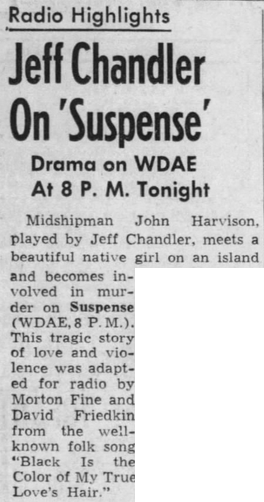 This was last updated in 2018; no AFRS recordings have surfaced.

O'Brien seems to be underacting at the beginning of the play, and it seems confusing, but he's saving it all up for the horrors at the end.

Real life details about the events [You must be registered and logged in to see this link.]

This episode was last upgraded 2+ years ago; no AFRS recording has been found.

The original title was "Needle in a Haystack." The Suspense TV adaptation was broadcast the next day, starring Lee Marvin; no kinescope of the broadcast seems to have survived.

This clipping refers to the TV version. 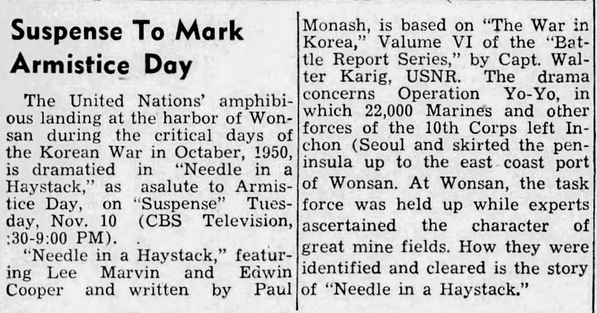 The script is based on Edgar Allan Poe's story, considered the first mystery based on a real event. [You must be registered and logged in to see this link.] 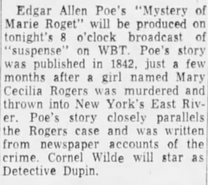 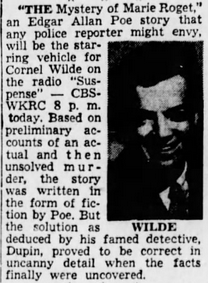