The episode was last updated 9 years ago. There is no known circulating AFRS recording. 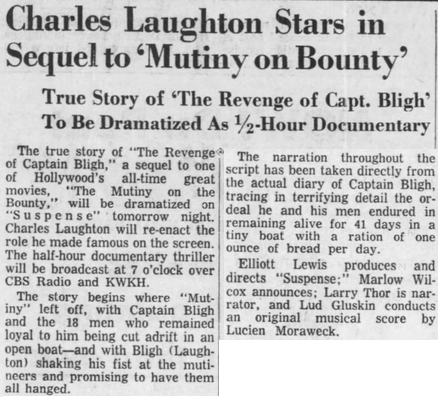 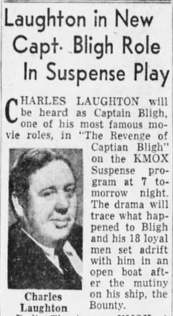 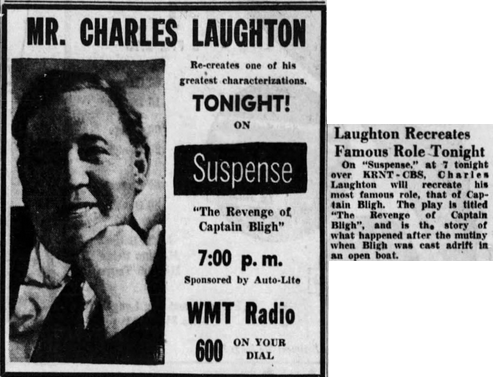 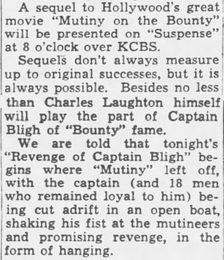 This episode was updated 2+ years ago. No AFRS recording has surfaced. Interest in radio drama is waning among the editors of the broadcast entertainment pages of the newspapers. Comments and timetables related to TV programming are muscling radio information off the pages... until Agnes Moorehead has a Suspense appearance. Then the CBS publicity department gets into high gear. Newspapers don't include as much information about a Moorehead feature as they did, but no other radio program gets as much coverage as Suspense does this week.

These are the closing weeks of Suspense as an advertiser-sponsored feature. Big changes are ahead for the series... 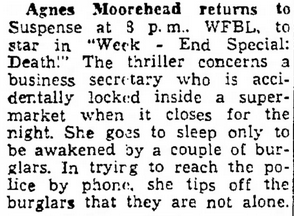 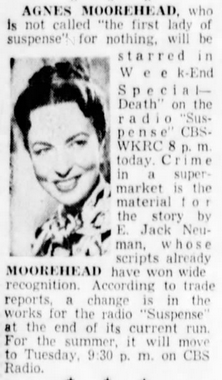 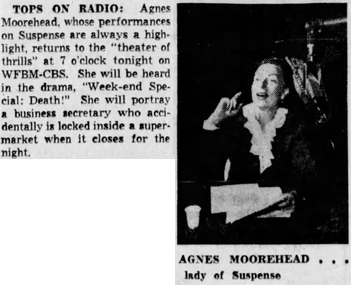 This is a nice upgrade from last year's posting. There is no robust great sounding recording of this, but this is better than what was circulating. No AFRS version has been found.

Everyone knows Robert Wagner... but Mona Freeman is less known now. Here is her Wikipedia page [You must be registered and logged in to see this link.]

Newspaper clippings were posted previously... these are new.

These are the original stories that appeared in the Sunday newspaper magazine American Weekly. Part 1 appeared on Sunday, June 21, 1953, and part 2 appeared on the 28th. The story was changed to be two college students rather than a family when adapted for Suspense. 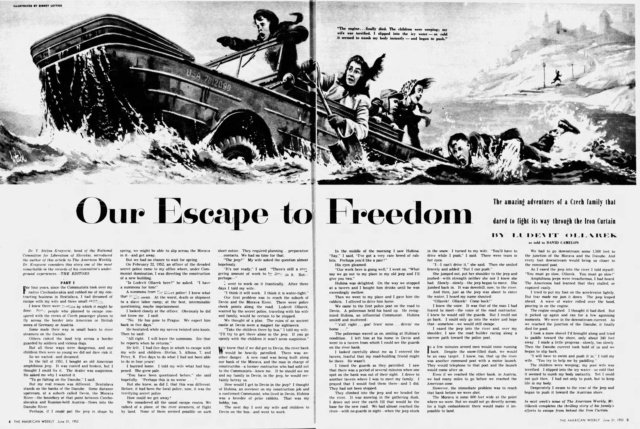 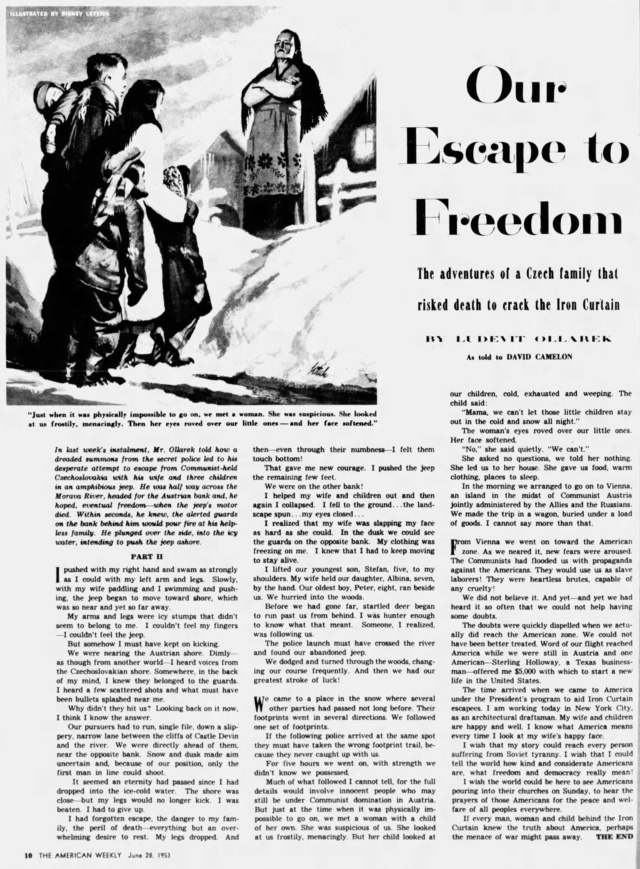 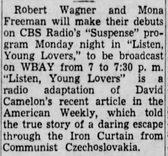 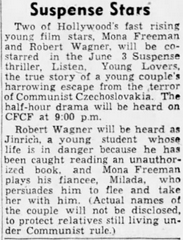 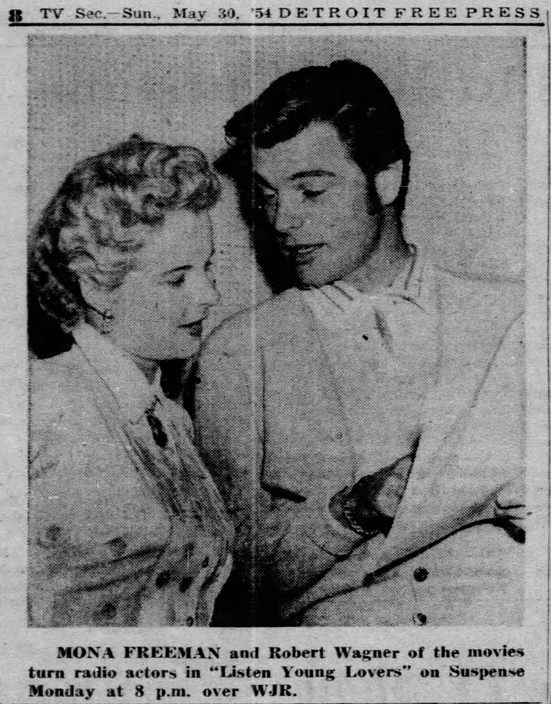 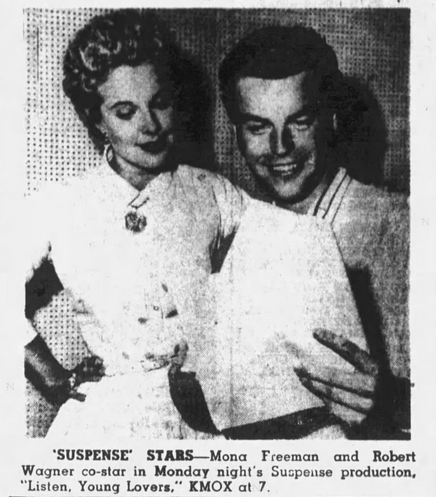 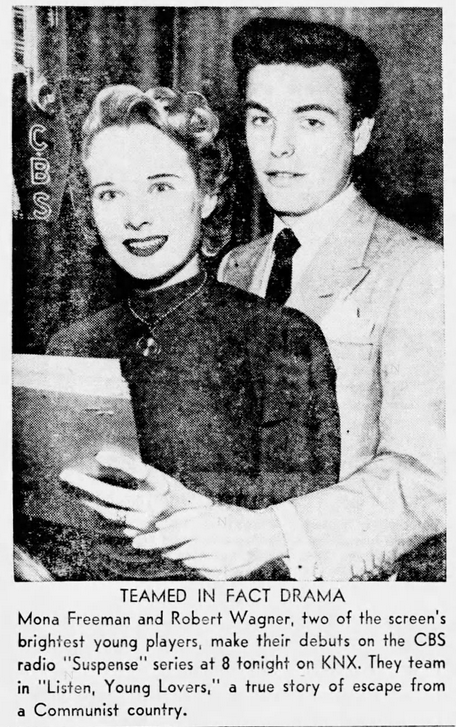 The network version of this episode has not been updated for 9 years. The AFRS version was updated about 20 months ago.

What made this so different, however, is that Auto-Lite stopped both the radio and the television broadcasts at the same time.

The final Auto-Lite radio broadcast was June 7, 1954 Terribly Strange Bed. Cobaltian extraordinaire Chasedad (and a member of the legendary C3DS) reminded us that at around the 28 minute mark you can hear Harlow Wilcox' voice break just a little in making his final announcement.

A few weeks later, Elliott Lewis would leave. In an interview in the 1970s, he said it was clear that there was no future in sustained radio. Somehow, Suspense survived another eight years as so many of the other dramatic programs slowly collapsed around it.

Lewis was replaced by Norman Macdonnell (who directed the series in the 1949-1950 season under producer William Spier), then Antony Ellis, and then an interesting period led by Bill Robson, then finally a return to New York. The Auto-Lite/Lewis emphasis on history-based or history-influenced stories was reduced, and the idea became primarily to find interesting scripts that would retain the interest of the audience, regardless of any historical tie-in. And, of course, repeats of some of the series (and Escape's) best episodes. 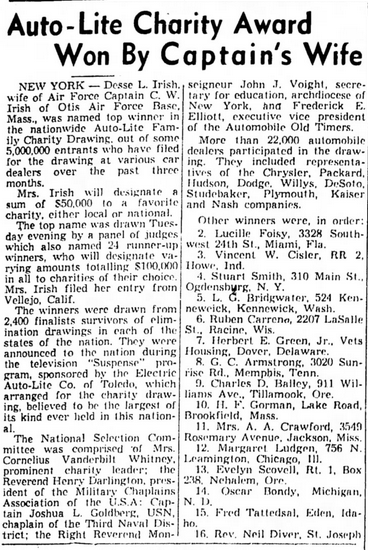 For some strange reason Google Chrome is referring to the last 3 Suspense posts as dangerous!

This is a nice upgrade of a file posted a few months ago. The long-sought AFRS recording here is "new" to circulation but is low quality.

* * * * * * * * * * * * * * *
Mistake in the copywriting and editorial departments! Though the headline says TV, this is a review of the radio episode about John Dillinger. It starred Van Heflin. A nice copy was posted a few days ago. 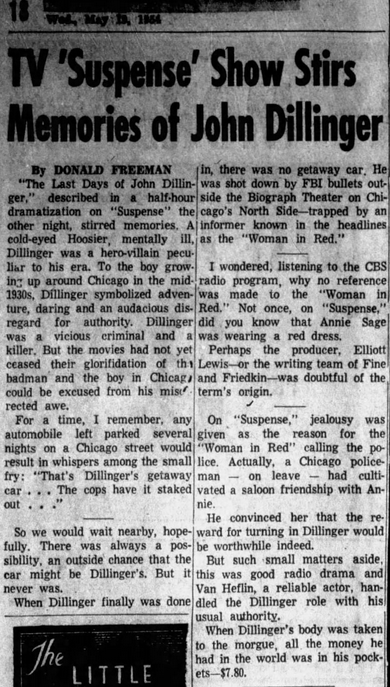 Greybelt....It gives me the option to keep the file anyway, which is what I do. I then have to put an mp3 tag on the end & run it through Switch. Chrome downright refuses to go to Hubic!

Newspaper clipping posted previously; this is a new one...

Without a sponsor to drive aggressive publicity by CBS marketing, news clips are harder to find, and the ones that are found are usually shorter.

The post-Auto-Lite era also de-emphasized Hollywood stars. Budgets for appearance fees were constrained, and appearing on television had greater impact than a radio appearance. Studios and agents no longer considered radio as a critical element in their paths to their success.

There were some movie stars, like Vincent Price, who had great affection for the medium, and accepted their radio roles with great anticipation and pleasure.

Now, the CBS radio ensemble was down to a hard core of actors whom we know well and enjoy their skills so much.

Aussie OTR collector and voice actor, and great OTR friend, and generous contributor of recordings to this Suspense thread had an interesting story. One of his acting acquaintances said that during this part of the 50s a couple of the CBS actors were having lunch and were discussing the shift from radio to TV and how they still loved the radio work. They decided to make a list of who was still involved, and it came down to 80 actors. This was quite different that their experience in the decade before when they were still meeting new actors who would go in and out of radio studios as they tried to make their way, especially into movie careers. Radio was no longer a stepping stone into a broader career, but was becoming a specialty of a small community of actors and technicians who cherished the opportunity.

It was always interesting to me at the FOTR conventions, and working with the guests here and there, how long and deep the collegial relationships were. They were much different than other entertainment relationships that I had known about. As radio slowly vanished, those personal and professional relationships they developed lasted the rest of their lives.

So we're at the end of an era and into a new one, and Suspense would still be a place where radio's best were always welcome.

I believe that you are the only thread-watcher having these issues now, but it is likely that others may have them, too. Whatever security software is running may have a whitelist that you can adjust accordingly.

hubiC was a project of some software engineers who were working on a proprietary project for cloud storage and networking. In that project, they made the cloud storage available to the public. Two years ago, they decided to stop the service and concentrate on other aspects of their business. But they did commit to keeping the service available to everyone who had signed up. They just decided to pursue other cloud opportunities.
[You must be registered and logged in to see this link.]
The service may still be available, but they won't be updating it and that means they won't be keeping up with various changes that outside privacy and security software providers will be making. My expectation is that at some point more people will have difficulties as you are experiencing as browsers integrate more privacy and security measures. I've tried a few of these-- for example, DuckDuckGo's privacy plug-in for Firefox won't allow full access to pCloud!
This has been one of the reasons that I have been posting links for two services for the Suspense recordings.
At some point, hubiC is likely to disappear. We used to like copy.com, and that was gone at some point when Barracuda Systems decided that they could not compete.
If others have issues with the cloud services at various times, please let me know. We may need to use a different service at some point. This is what happens when you need to rely on "free" -- at some point they realize they have a bunch of freeloaders on their servers. But we're nice freeloaders.

This episode has not been upgraded for 9 years. No AFRS recording is available.

No, it's not your imagination... "didn't Suspense just run this?" In January, Frank Lovejoy starred in this classic play by one-hit-wonder scripter Walter Bazar. He would become a leading newspaper journalist in New York and Washington. I've wondered if a script just wasn't ready for taping and they grabbed this old reliable one. You can tell which scripts everyone thought were the best by how often they used them.

There are almost no newspaper listings of consequence in these last weeks of 1954. It's mainly timetable listings. There's a stark contrast in the volume of listings and their detail for the Lovejoy performance and just 11 months later there's nothing except time and station.

It is likely that Suspense was in constant review for possible cancellation. There's less than a year ahead for the return of Bill Robson at CBS. But there are still lots of good scripts with CBS radio pros to be offered in the meantime...

The TV version was done in 1951 with Mildred Natwick (the first actress to do Sorry, Wrong Number on television -- in case that comes up in a trivia contest) and John Forsythe, who would be known for the TV series Bachelor Father and a late career success, Dynasty.
[You must be registered and logged in to see this link.] 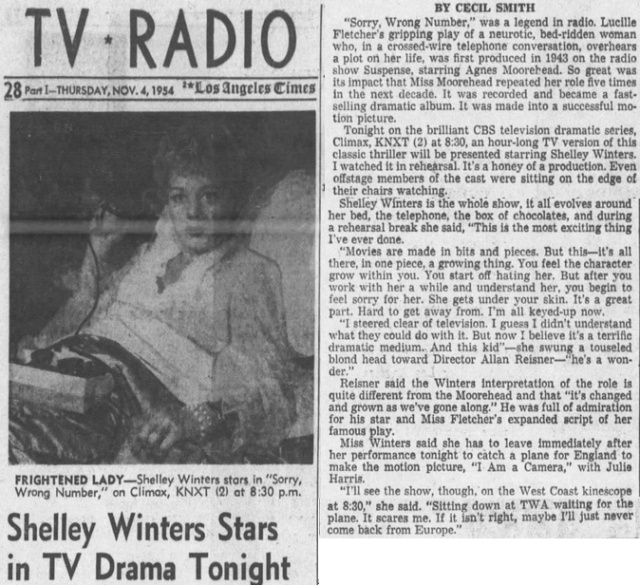 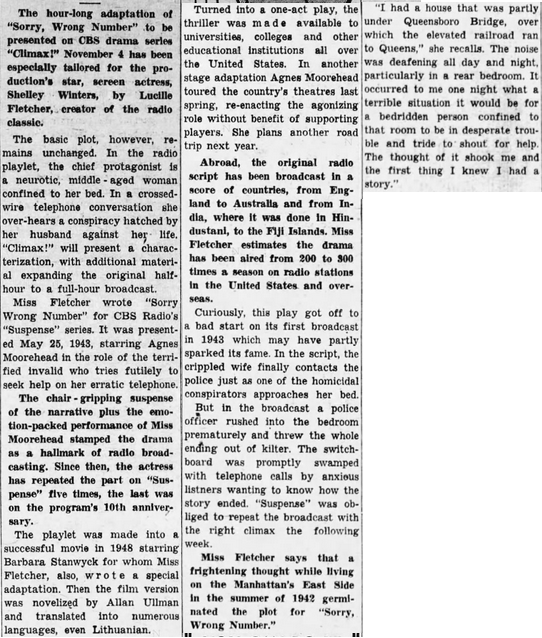 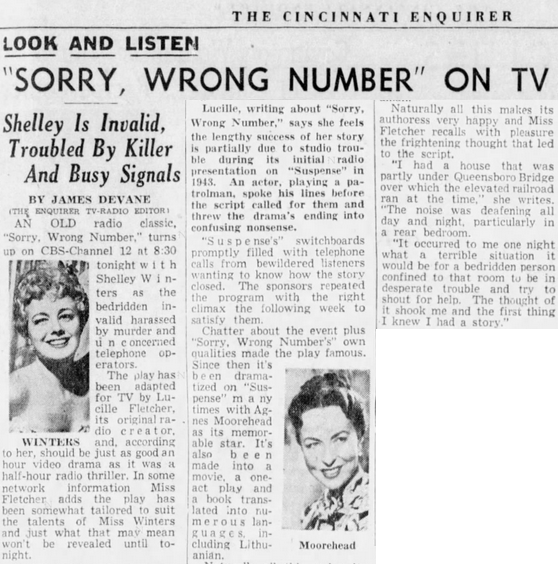 This episode was last updated 6+ years ago. A regular AFRS recording has not surfaced, but a low encode AFRTS Adventure Theater has been in circulation. It can be found at Thom Whetston's AFRTS Archive blog site [You must be registered and logged in to see this link.] 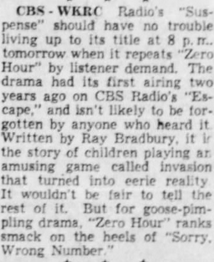 This episode has not been updated in more than 7 years. No AFRS version has surfaced.

Today's recording has not been upgraded for more than 8 years. This seems to be an edited AFRS version with the Suspense "march" and no network ID. The AFRS identification seems to have been edited out. There is a network version that is in nice sound that was received about 8 years ago, too; that link is below as well, and has the official Suspense theme.
NOTE - The "network version" is an incorrectly patched episode with a closing that is inappropriate for this period in the series. MANY THANKS to chasedad for pointing this out. See thread for more details.

It appears that this script was planned for 1955-04-26 based on the newspaper clippings. Sight Unseen was aired instead. There is no information why this was done.

Eve McVeagh was not a big star, but she was always busy
[You must be registered and logged in to see this link.]

Network [You must be registered and logged in to see this link.]

What you've got listed here as an AFRS recording of "Going, Going, Gone" is in fact a network recording, I believe. The "march" theme was implemented on the closing of the network broadcasts starting in 1951 and continued all through the sustaining era until the William N. Robson episodes, where he reinstituted the original closing theme.

The "network" recording you attached has a patched closing with Harlow Wilcox giving the CBS identification over the original CBS theme, which would place it during the 1948-51 era.

If you listen to the CBS network recording of the following week's show ("Lili and the Colonel") you'll hear that there's no CBS identification at the end of that, either. It must have been an anomaly that they didn't include that, or a promo for "The Whistler", during these few weeks.

I hate when people send me facts