This episode was last updated 3+ years ago. An AFRS version has not been located

This episode was last updated 7+ years ago. There is no AFRS recording at this time.

This title was used twice on Suspense. This storyline involves the search for a cat that is carrying the black plague before it infects someone. The original title for this episode was "Black Magic." The script was originally used on Hollywood Star Playhouse on 1950-10-30 as "Black Death" and starred Robert Cummings; the episode is not available.

The other time this title was used was in 1962-07-01 with a story line about a mad scientist with a disintegrating ray.

Today's episode, a repeat of repeat of 1950-06-29, was last upgraded almost 2 years ago; no AFRS recording has been found.

Stool Pigeon was originally planned for this date, but was held until later in September.

Today's episode is a repeat script performance of 1951-03-15 that starred Van Johnson. The only recording we have of that is the unedited dramatic performance, or, it could be the edited dramatic performance that was played with the orchestra and announcer in studio on that broadcast day. The bottom line is that today's 1955 recording with John Dehner is the first one in the Suspense chronology that is a complete broadcast.

This upgrades a file from 9 years ago. No AFRS recording has been found.

This episode has not been upgraded for 7+ years; no AFRS recording has been found. This is a repeated script of 1951-09-17 Neal Cream, Doctor of Poison.

* * * * * * * * * *
Jerry Haendiges is getting back into the swing of things after suffering a stroke. His note on his first post at the OTRR FB pages was "OK, Let's see if we can pick up where we left off before being so rudely interrupted."

Newspaper clippings posted previously; this is a new one.

I've always wondered where the term "stool pigeon" came from... this page seems to explain it best.
[You must be registered and logged in to see this link.]

This is the second Suspense episode with a tie-in to the Dreyfus Affair [You must be registered and logged in to see this link.]
A few days ago, The Bertillion Method was posted. Bertillion's pioneering detective work convicted an innocent man, and Dreyfus ended up serving his time on the Island.

Today's recording is an AFRS version that had fallen out of circulation. It probably "disappeared" because of its low sound quality. The network version has not been updated for 8 years. It could use an upgrade, but is in better sound than the AFRS copy.

This is the third and final time the Lizzie Borden story was presented on Suspense, each time with a different treatment. See a prior post regarding the 1952 broadcast [You must be registered and logged in to see this link.]

Greybelt, the network recording link is the same as the AFRS link.

There has been no upgrade of this recording for 7+ years; no AFRS recording has been found.

At this moment, it looks like there are enough daily Suspense upgrades to take us through August.

I have already booked my visit to Mid-Atlantic Nostalgia Convention.
[You must be registered and logged in to see this link.]
Martin expects the convention to be "normal" by his contacts with the various health and other folks in Maryland. Wally and "the Beav" are among the guests! I'll be on a panel with Don Ramlow and Karl Schadow about Frank Lovejoy's radio career. And the radio recreations by the Gotham Radio Players and Metro Washington OTR Club are always a treat. Gosh I hope my Casey book is done by then.

The SPERDVACkians have started the investigation into their post-COVID convention. It's all preliminary, no target dates yet, but the desire to reconvene among both of these groups is very high. I'd say "fever pitch" but if somebody does a temperature check at the door they may mistakenly think it's COVIDian in cause and not our heartfelt desire to be with people who understand us

Speaking of MWOTRC -- mark your calendar for Friday evening (eastern time) July 9 as I will be the speaker that evening -- and the topic will be Suspense. The meeting will be by Zoom. I was on one of their recent Zoom meetings and I was surprised by how well it went, how coordinated it was, and how good their content was. Kudos to them for keeping their corner of OTRdom vibrant.

The network version sounds better [You must be registered and logged in to see this link.]

Newspaper clippings posted previously; this is a new one...
1955-10-25 Kokomo IN Tribune

All of the Degoo links that were unavailable for recent posts are now posted, and all of the posts have been updated.

* * * * * * * * * * * * * * * * * *
This episode has not been upgraded for 7+ years. No AFRS recording has been located. It is a repeat of the missing episode The Trials of Thomas Shaw from November 1951. That original performance starred Joseph Cotten. The cast for this 1955 performance was written on the 1951 script that was in the Thousand Oaks files! It looks like Owen, Kane, Kearns, Hill and Butterfield reprised their roles, or at least Ellis planned them to! 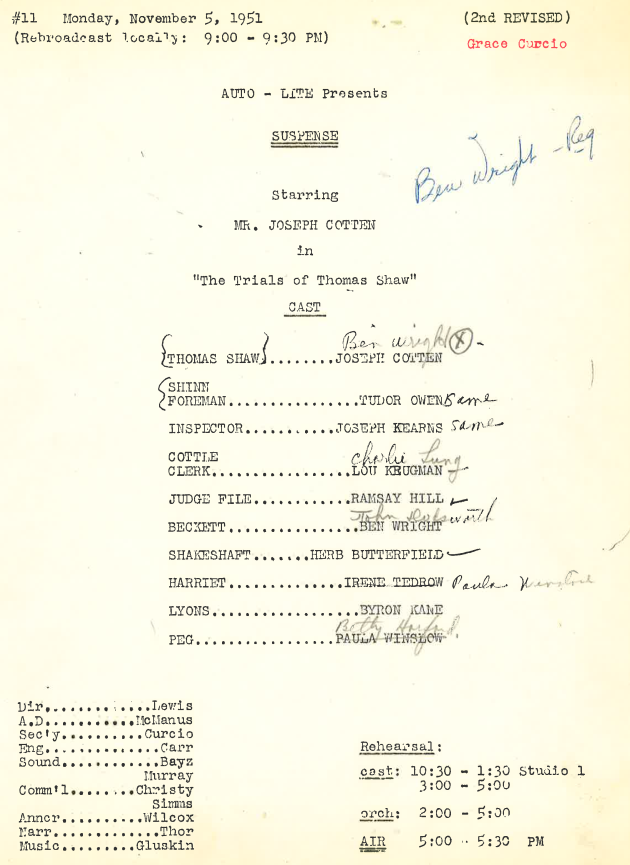 November 1951's network recordings are all missing! There are other performances of some of the scripts. Luckily, The Trials of Thomas Shaw was re-used as this episode. The Mission of the Betta, written by Robson under a pseudonym, is the episode involving a submarine and used script sections from an episode of Man Behind the Gun. This would be a great find if a recording finally surfaced. The Embezzler was only done the one time, and has been recreated by American Radio Theater in 2013 [You must be registered and logged in to see this link.]
A Misfortune in Pearls starring Frank Lovejoy exists in a transcription collection as an AFRS version that was purchased on eBay a few years ago for more than $700. It is hoped that it becomes available sometime. The script was redone as End of the String, which will be posted here in a few days. It would, however, be great to hear Lovejoy in this role.

This episode has not been upgraded for 7+ years. No AFRS recording has surfaced.

This is the only listing for this episode that could be found in newspapers.com. The primary interest in the newspaper pages is on television, and the unsponsored Suspense is getting little or no resources of the CBS publicity machine. It's just another line in the shrinking radio timetables.

Some newspaper listings just have a generic plot description, or just a suggestion to listen.

The prime time listening of radio is a very narrow time range by now... Suspense is up against Dragnet, Fulton Sheen, and a Mutual program, Broadway Cop, of which I have never seen a recording listed in circulation.

This episode was last upgraded 7+ years ago. No AFRS recording has been found.