Today's episode has not been upgraded for 7+ years; there is no AFRS recording known to exist.

This episode has not been upgraded in 5+ years; there is no AFRS version available at this time. The script was produced in 1951 as Misfortune in Pearls with Frank Lovejoy. No recording of that broadcast is available.

An upgrade of this recording was last posted 2+ years ago. No AFRS recording is available.

This episode was last upgraded almost three years ago. No AFRS recording has surfaced.

Working titles were "Hostages in Hollywood" and "The Hollywood Hostages." This script was originally planned for 1955-11-08, but Report on the X-915 was broadcast instead. Some newspapers have the title as "Ghost Town Junket," but that appears to be an editor misinterpreting the CBS press release.

LQ AFRS version [You must be registered and logged in to see this link.]

A clipping was posted previously; these one is new, and it's from my hometown paper!

This episode was last upgraded 7+ years ago; no AFRS recording has been found.

This episode was last upgraded almost two years ago. No AFRS version has been located.

Today's episode has not been upgraded for 7+ years; no AFRS recording has been found.

This episode has one of those background stories that makes researching Suspense so interesting. The writer of the episode is Jules Maitland, a somewhat noted screen and television writer of the late 1950s and early 1960s. But there's a twist... he's an ex-con who served time in San Quentin.

Remember, convict Edgar Scott Flohr was also at San Quentin. He wrote Door of Gold and Escape to Death while he was serving time. It is not known if Flohr and Maitland knew each other. Flohr was still at San Quentin when Maitland was released.

While Flohr had some success but went back to his old criminal ways, Maitland had notable success for a brief time in radio, television, and movies. Maitland's notoriety came from his acquaintance with two criminals: killer Donald Bashor and Caryl Chessman. Both men were executed in the gas chamber, but Chessman's case was more newsworthy in that it raised questions about the death penalty because his execution was for a series of crimes that did not include murder. [You must be registered and logged in to see this link.]

This Phones Die First is based on elements of Maitland's experiences in San Quentin. It was after his release that he visited there to record interviews with Bashor. They became a radio documentary by Maitland, Judgment, that won a Writers Guild award. Those interviews would become the basis of a Playhouse 90 episode and also a theatrical play.

RadioGoldindex has Maitland's name wrong all four times. It's "Jules Menklin" for this episode, and "Jules Menklen" for the others. I've sent a note to someone who can update the files.

1950-07-26 Santa Rosa CA Press Democrat
Note that one of the law enforcement officials has the last name of "Flohr." It's no relation to our favorite safecracker and forger, Scott Flohr, but just one of those "stranger than fiction" real-life coincidences. 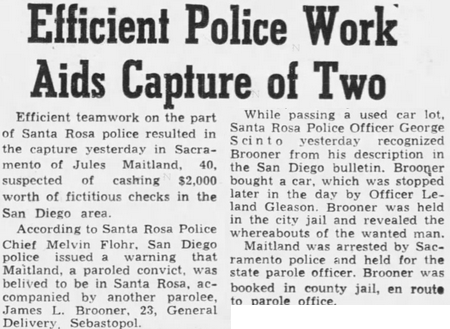 Murderer Donald Bashor played a big part in Maitland's career. He interviewed Bashor and promised that the interviews about his life and his crimes would not be used for any purpose until after his execution. This link has some details about Bashor [You must be registered and logged in to see this link.]

Bashor was executed on October 11, 1957. Maitland did not waste any time getting the Bashlor story to the air.

Judgment was a 3-hour documentary on KNX radio that included clips of the interviews with Bashor. It won a Writers Guild Award for radio documentary. It caught everyone by surprise... I could not find a listing of the date and time for its original broadcast, but it was so compelling that it was quickly repeated. I am not aware of any surviving recording.

This article has some curious background about the series and this particular episode.
[You must be registered and logged in to see this link.]

“Portrait Of A Murderer” makes extensive use of Bashor’s actual statements and a first-person camera to create a faux-documentary style that was decades ahead of its time. Penn marveled at the improvisatory aspect of Tab Hunter’s performance as Bashor, citing an unplanned moment in which Hunter stops to pick up a basket of spilled laundry just after his character has committed murder. It was a textbook case of how the immediacy of live television was meant to work.

Maitland turned his attention to the Chessman case and created a documentary Justice and Caryl Chessman. The movie was released soon after his execution. The movie received a lot of publicity, some of which was that the filming was done under false pretenses as a television news story and not a motion picture. Many were concerned that the movie would glamorize Chessman as a sympathetic character while minimizing the pain he created for his victims and their families.
[You must be registered and logged in to see this link.]
The Chessman movie is not available online. 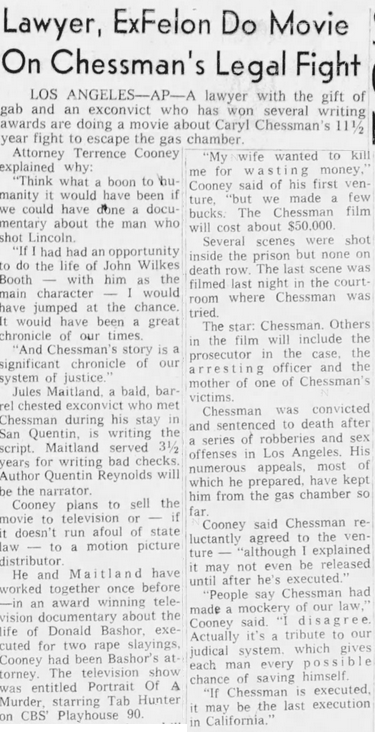 Maitland used his Bashlor resources to create a play "Pieces of Time." 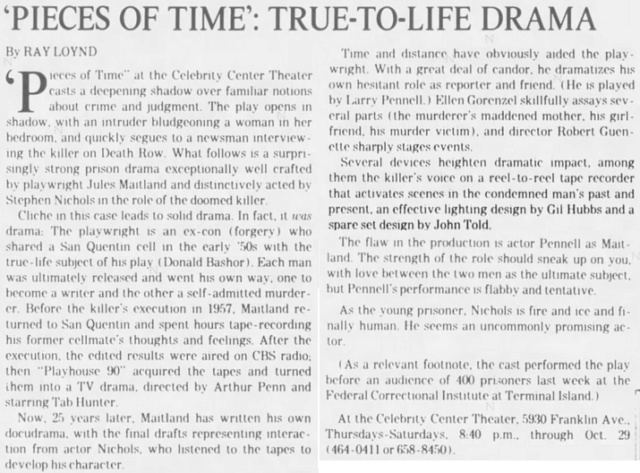 What do writers do to fill their down time? Look for other writing gigs! This kind of work writing short pieces for eulogies was likely easy for him to do, and probably a source for story ideas. Note that they don't go into the details of his past or his achievements. The story was picked up all over the US. 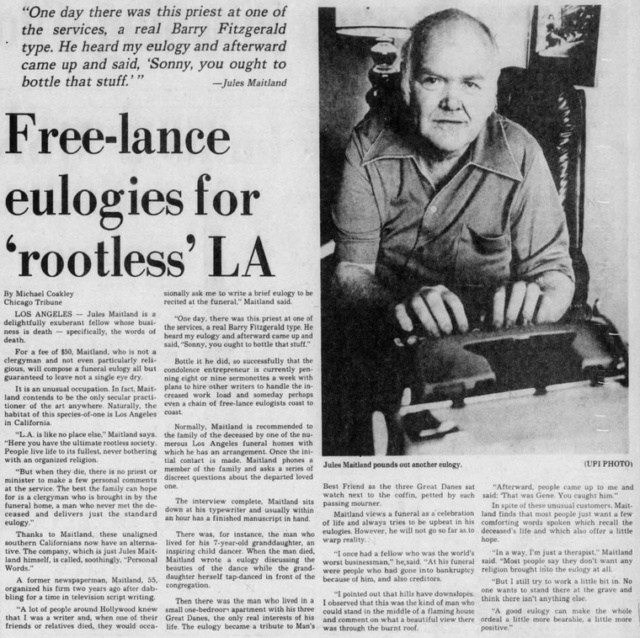 Today's episode was last updated 3+ years ago. A LQ AFRS version exists, or more correctly, a recording exists that is suspected to be the AFRS version as its ending is clipped.

The script is by Shirley Gordon, a writer for Radio-TV Life. She also wrote Statement of Mary Blake.

The AFRS version, found 6 years ago, is at [You must be registered and logged in to see this link.]

Newspaper clippings were posted previously; this is a new one... 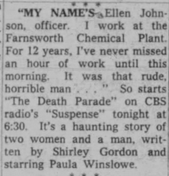 Today's episode is one of my favorites. It has not been upgraded for 7+ years; no AFRS recording has surfaced. 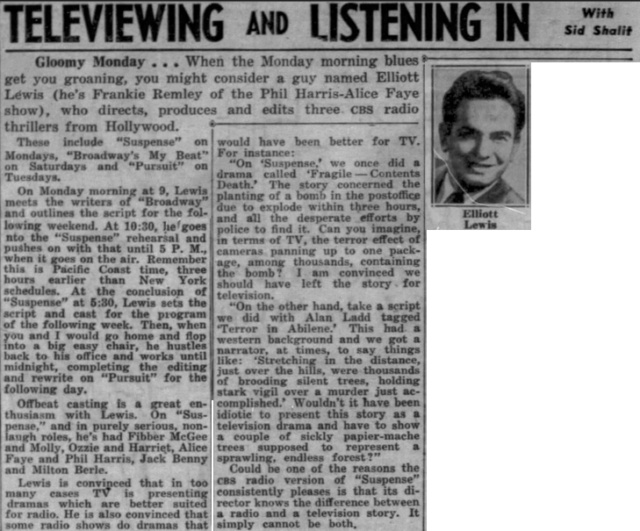 Today's episode has not been upgraded for 7+ years; no AFRS recording has surfaced, but is known to exist and is #867.

No newspaper clippings have ever been found for this episode.

This episode was last upgraded about 5 years ago; no AFRS recording has been found.

* * * * * * * * * * * * * * * *
This is a curious item about Antony Ellis and Suspense and this specific episode: a CBS mailroom employee gets a big chance before the microphones! The play mentioned is "Ballad of Mender McClure" which was on CBS TV's General Electric Theater earlier that year. The part of "Death" was played by Vincent Price... so when Ellis saw Robert Miller in an after-hours CBS employee production, Ellis got a good sense of his abilities since it was such an important role in the play. (The TV version with Price can be viewed at [You must be registered and logged in to see this link.] 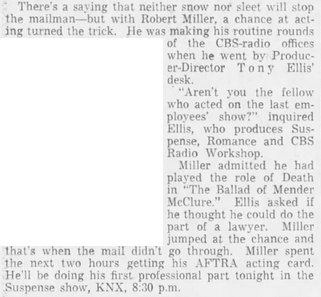 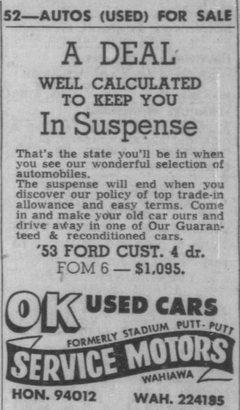 Today's episode has not been upgraded for 6 years, and in a reversal of our usual situation, we have the AFRS recording but do not have the network one. The AFRS music fades quickly after drama; even though some past collector of decades ago edited the recording in this manner, there is enough of the original let to indicate that this is not a network recording. Whatever the case, the search for a fully intact copy, network or AFRS, continues.

The script is by Bill Robson, but when it was first performed in 1952 he was having his Red Channels issues at CBS. He used the names of his sons, Christopher and Anthony, to create his pseudonym for that episode, but he finally receives proper credit here. The original title when he wrote it in 1952 was "Treasure Chest."