Today's episode was upgraded 3+ years ago; no AFRS recording has been found.

This episode upgrades a recording from 8+ years ago. An AFRS recording has not been found.

This date was supposed to be the initial broadcast of The Man Who Threw Acid, but it was delayed since April because the underlying news story, the acid attack that blinded labor reporter Victor Reisel, had not come to a conclusion. In the meantime, The Big Story had a production based on it. The fictionalized Suspense story was broadcast on 1956-07-18 as they probably figured waiting was fruitless when others seemed to have no problems broadcasting programs about it. The perpetrators were finally brought to justice a month later. More details are at a previous post [You must be registered and logged in to see this link.]

Today's episode was upgraded almost 3 years ago; no AFRS recording has surfaced. This is a re-use of a Jules Maitland script on The Chase 1953-05-17.

This episode has been upgraded a lot recently as it has appeared in the Hehn and Kelez-Falk reels often. Some of those upgrades have never been posted... but here's the best of them. No AFRS recording has been found.

Today's episode was last upgraded two years ago; the AFRS recording is "new" and is not fully intact.

It is different. Robson's intros change the focus to a relationship to the individual listener. Gone are the days of the family around the radio... there is more 1:1 listening to radio than ever before. Television dominates the family hours after school and work, and Suspense begins the Robson tenure on Tuesday nights... for two weeks! The series moves to late Sunday afternoons, after radio's ball games, after the visitors have left, or as those visitors listen in their cars on their way home. The weekend comes to a close as the listener unwinds to some fictional story of a person in great danger... it helps one get ready for Monday's start of the rat race, again. It's a major change, but it keeps Suspense on the air when television pushed other radio programs to the side. Suspense zigged when everyone else zagged.

Today's recording is of the favorite "story about the rats." Occasionally you'd see it listed in catalogs as "Three Skeleton Quay," but all of the scripts, both Suspense and Escape, have it as "Key." This is a new network version, but it's been edited down to the drama; if it was in circulation, it has not been for quite some time. The AFRS recording we've had for years is intact.

Suspense expert Don Ramlow told me that Vincent Price would always strike out a clause that was common in movie contracts about not appearing on broadcasts on television or radio within a particular date range if a movie of his was being released. He always insisted that contracts allow him to do radio drama whenever he wanted to, without restriction, he loved it so much.

...the network episode of "Three Skeleton Key" that you posted today is actually the 10-19-58 broadcast and not the 1956 one. According to RadioGOLDIndex their collection includes a complete network version of the 1958 broadcast with commercials, so it's out there somewhere.

I have made the change to my collection.
The links are being deleted

Thanks yet again for your marvelous collaboration and support!!

AFRS version, this is the same file we received 8+ years ago
Suspense_1956-11-11_Three_Skeleton_Key_wVincentPrice AFRS UPGRADE-2.mp3
[You must be registered and logged in to see this link.]

This episode has not been upgraded in 6+ years. There is no AFRS version available. It was repeated in 1958, for which we have an AFRS but no network.

The Long Night is actually a short story (couldn't resist the paradox). It appeared in the October 1956 Atlantic Monthly. What's surprising is how soon it got to the air. Assuming the October issue was on the stands in late September, the adaptation by Sam Pierce came together very quickly.
[You must be registered and logged in to see this link.]
The author's background in the Atlantic explains how he could put great detail into the story:

Following his graduation from high school, LOWELL D. BLANTON served four years in the Navy as a radio operator. During World War II he was control tower operator with the Army Air Force, first on American fields and then in the Southwest Pacific. This prepared him for employment with the Civil Aeronautics Administration, and since the war he has worked at control towers in Illinois, North Dakota, Michigan, Texas, Idaho, and Alaska. He also holds a commercial pilot's certificate.

Blanton won the O. Henry Award in 1957 for the story. One critic said "... moves crisply along through its bated-breath narrative" compared to other short stories of the time. That makes it seem to be natural for Suspense and likely made it easier to adapt. It was published in a collection of O. Henry Award winners in 1958, likely the reason why the episode was repeated again that year... aside from it being good! This seems to be Blanton's only venture into literature. He's not a Suspense "one-hit wonder" writer, since it's an adaptation.

Pierce did the adaptation but also appears as Charlie, the voice of Rockford Radio.

Some listeners are not fans of the ending. I guess they either wanted a crash or a rescue, but leaving it hanging frustrates them. What's the focus of the story? The lost pilot or the air traffic controller? I think the ending puts us right in the seat of the controller and the situation of helplessness. The story and the presentation are compelling listening for me because we sit in that controller's chair. Lovejoy is perfect as the objective almost unemotional relayer of tasks and actions... but you know it's tearing him up inside.

The title was used again in 1960 in a home invasion story. Most collections I've seen just assume it's a repeat of this script.

This episode was last updated almost two years ago. The AFRS recording fell out of circulation, but is re-presented here after decades away; it is not fully intact. The story was originally used on Escape.

One clipping was posted previously. No other clippings have been located, but we're still looking!

This episode was upgraded about 2 years ago. No AFRS recording has been found. This adaptation of the book of the same name was originally presented on Escape. 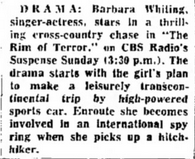 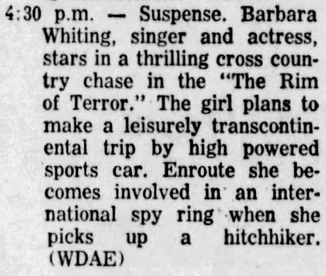 This episode was last upgraded 9 years ago. No AFRS recording has been located.

After Robson took over Suspense, he aligned the production with his vision and resources, and then asked CBS for a larger budget for talent and publicity. Some of the savings were coming from re-used scripts, recorded music and effects, and the advances in recording and communications. Newspaper listings are starting to appear more often than they did at the end of the Ellis run, one aspect of the increased budget commitment by CBS. It would never be what it was, but a resuscitation was in process... 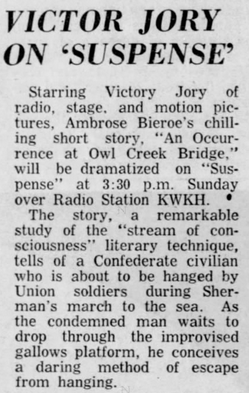 Today's episode has not been updated in 7+ years. An AFRS version was found about 10+ years ago and is posted here.

The script title is two words "Eye Witness" though it is more common today to have it as one word.

This was Duff's return to CBS radio -- but he may have had other things on his mind... for all of the aggravation Duff had from CBS in the Red Channels period, the network signed on for a comedy series with him and wife Ida Lupino, Mr. Adams and Eve. The series would start about four weeks after this Suspense broadcast. Duff had been on CBS TV earlier in 1956. He had a role on Front Row Center in March and Climax! in July. He was also in many syndicated programs, many likely broadcast on a number of CBS TV affiliates. Success is the best revenge; Duff was much more prosperous and a bigger star by the time he returned to CBS radio than when he left it... or more precisely, when they left him.

AFRS #611 from disc [You must be registered and logged in to see this link.] 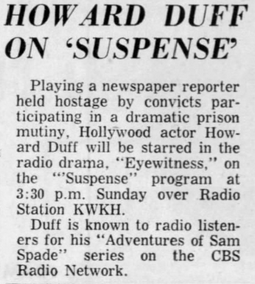 There are some episodes at [You must be registered and logged in to see this link.] 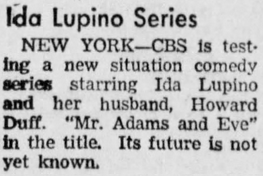 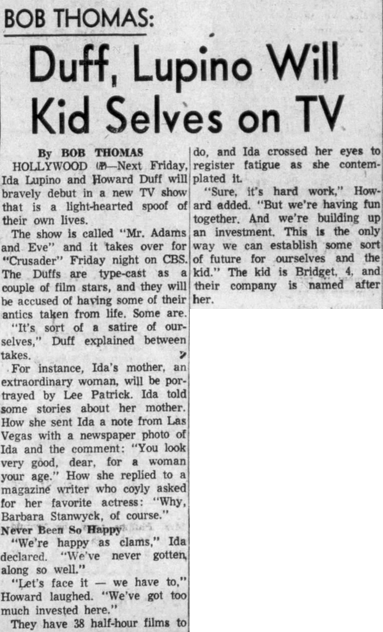 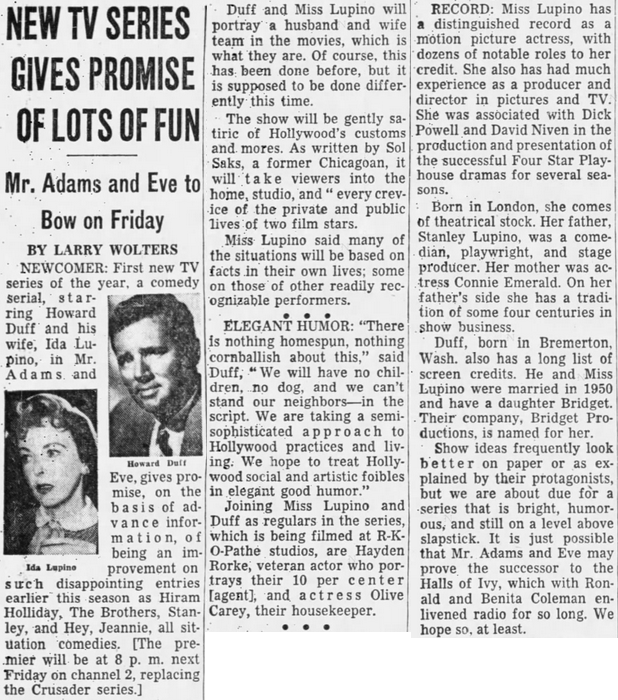 This episode has not been upgraded for 7+ years. The network and AFRS versions are in the collection.

AFRS version is from the AFRS Christmas Library, item C-57
[You must be registered and logged in to see this link.]