I'm new here and will post links to my collection as soon as I've been here long enough to post links.

In the meantime does anyone have any Bulldog Drummond, other than the ones listed below, that they are willing to share. I prefer flac format, but mp3 is fine.

I have these:
Death Loops The Loops
Death At The Races
Death In The Deep
Death Uses Disappearing
A Ride In The Moonlight

If any of you want the titles listed above, let me know and I'll post links as soon as I can. They are from wav files taken from TD.

Thanks for your consideration.

Thank you kdmarket. I've only been on this forum a couple of days but, I have noticed that you are always there helping people out. Thanks again.

thanks only have a few Bulldog drummond , always looking for more Thanks again


[You must be registered and logged in to see this link.]

I have 23 episodes of Bulldog Drummond in mp3 format.

I have uploaded them to....

Thank you Geezer. I appreciate it.

To artatoldotr, Thank you so much. It is greatly appreciated.

[quote="artatoldotr"]I have 23 episodes of Bulldog Drummond in mp3 format.

I have uploaded them to....

Hi Greybelt, I would try it except for two things. I'll be 80 years old in August and I need hearing aids. The aids do change frequencies so what I hear is not necessarily true sound.

Hey toebig, don't use our youth and inexperience against us

I have a hearing aid as a result of some surgery 33 years ago -- and the technology they have today is absolutely stunning. Mine connects by Bluetooth with my iPhone so I can adjust volume and equalization depending on my circumstance. I can't get full benefit from it because I only have one aid, but for folks who have loss in both ears, this is incredible. They have restaurant settings, outdoor, indoor, and you can make your own. My favorite is that it ties in with the GPS so you can set volume and equalization for a particular location and every time you get near that spot the hearing aid will switch to those settings. What got me with my first hearing aid was how they set the equalization to your particular hearing loss -- I have great midtones in that ear but loss on lows and highs. My first day with it I just sat outside and listened to the birds! I never knew we had so many around us. With today's tech you do get much more accurate sound. Years ago they just raised volume, but now they do so much more.

Hi Greybelt, I'm willing to help out where I can, but I don't have the confidence in hearing aids that you do. Mine are about 10 years old so I'm sure the technology has improved quite a bit. So I wouldn't feel comfortable picking the better sounding episodes. I'll help where I can.

Thanks for all that you do.

Greybelt and I have researched a number of shows over the last few years and I'm looking for a new one to do. I am not familiar with this show so it would certainly count as a new one for me. Although I have a few of these files I have never listened to them. Toebig, have you started any work on it yet? If not, I am going to create an initial research spreadsheet tomorrow and am going to start listening to the shows. Let me know please.

Here's the site for a log of Bulldog Drummond

Here's the site for the first lines of Bulldog Drummond

artatoldotr wrote:Here's the site for the first lines of Bulldog Drummond

Thanks Art, I always start off a new project with the Otter log and then go from there.
I didn't have the first lines one though so I'll incorporate those as well.

The interesting thing to me is where did the dates and titles come from in the first place, since not many shows seem to be available and of the few I've listened to so far only a small number can be accurately verified at this stage. Dave Goldin only lists 22 and a few of those are Ziv syndications. I haven't checked the newspapers yet - that will come later after the file collection.
I said I needed a challenge and this appears to be it.

Greybelt and Toebig have sent me their files and I'm in the process of picking up others. Thanks for you help.

I'm working on 1941 and here's what I've drummed up so far. If you have anything to add, points to disagree with or would like to research it with me, please let me know.

First Series
Billed as a summer replacement for Show Of The Week (a little early isn't it?), Bulldog Drummond took to the air for the first time on April 6, 1941 and ran each Sunday evening at 6:30 p.m. eastern as a sustaining show over MBS until the last episode aired on June 29. Starring George Coulouris as Drummond and Everett Sloane as his sidekick and former batman Denny, the program featured other artists from Orson Welles' Mercury Theatre, namely Agnes Moorehead, Paul Stewart & Ray Collins. All 13 of these initial shows were based in England.

None of the episodes are believed to be in circulation and none of the episode titles are known. The only references I have found to the shows from this period in newspaper searches are on June 1, 1941 where the Lincoln Star states 'Drummond solves murder involving a prize fighter, gamblers & gunmen' and from June 8 where the Louisville Courier-Journal and Cincinnati Enquirer both refer to 'Chutes That Don't Open Puzzle Sleuth'.

Audition for the shows starting up on Sept 28, 1941.
Following upon the apparent success of the initial run, MBS decided to bring Drummon and Denny to the US and base future episodes here. They went looking for a sponsor via a closed circuit presentation. An audtion disc was produced for this presentation and Jerry Haendiges has a copy of it. Jerry has posted a photo of the label on his label site and it looks like this.
[You must be registered and logged in to see this link.]
I have seen copies of this show dated 41-09-26, 41-09-28 and 41-xx-xx and I believe this latter date is correct. Since the program started up again on Sept 28, it is highly unlikely IMHO that the sponsor pitch was made that day or even two days earlier, and that in fact it took place much earlier than that. I have therefore dated this show as 1941-xx-xx and identified it as an audition. No mention is made of a title for the audition and no title appears on the label. I have seen documentation where this audition show is listed as the first show of the new season, however the Minneapolis Star and multiple other papers list it as 'Murder By A Corpse'. As with most of the shows in this series, we'll never know until the discs with labels and / or etchings or the actual scripts themselves show up.

I went through this series a couple of years ago, trying to identify which shows were what. I remember using the OTRR first lines site and finding problems with it. I don't remember much about it. I think one of the problems may have been that the following week's announced title didn't match the show listed. Anyway I do recall that quite a few of the shows were circulating with three or four different titles. Here is the only show I have with a 1941 date. It's definitely an audition. That one was called The Case of the Hare and the Hound, Hijackers, and First American Adventure. I'm glad you have undertaken the challenge of this series. It's one of my favorites, along with its reincarnation The Private Files of Rex Saunders. [You must be registered and logged in to see this link.]

Thanks. The file you sent me is another version (title) of the audition disc I mentioned in my blurb above. It is the best sounding of those I've received so I'll be using it in the set I'm accumulating. Not only are the shows circulating with different titles and dates there are a bunch with 1941 and 1942 dates and titles on them that are simply fictitious. I think people should be put in jail and the key thrown away for doing that.

BTW, I've never heard of The Private Files of Rex Saunders - I'll have to look into that next.

The interesting thing to me is where did the dates and titles come from in the first place, since not many shows seem to be available and of the few I've listened to so far only a small number can be accurately verified at this stage. Dave Goldin only lists 22 and a few of those are Ziv syndications. I haven't checked the newspapers yet - that will come later after the file collection.

Mike, the original source for all Otter logs (which may or may not have been improved/disfigured over time) was Jerry Haendiges' data. Now where THAT came from, particularly in the many instances where he does not claim to have the material in question, would be worth the knowing of. You may have already been here, but for what it's worth: 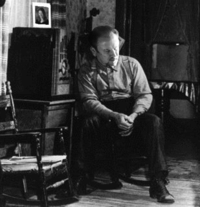 The program continued into 1942 as a sustaining show, with the same core stars and at the same time of 6:30 p.m. on Sundays. None of the shows for the remainder of the season are known to be in circulation. Newspaper searches show the episodes titles to be as follows, subject to verification.

At this point the second series concludes and Coulouris leaves the show to tour the country with his stage show 'Watch On The Rhine'.

Two months later the program resurfaces in a new season on MBS, moving to Monday nights at 8:30 Eastern. West Coast shows were apparently on Wednesdays (have to research this further - were they doing repeat shows or using transcriptions?). Santos Ortega has replaced George Coulouris as Drummond and presumably Sloane was still Denny.

As best as I can tell so far, the show titles were as follows for the rest of the year. Martin Grams always tells me that newspapers are only about 75% accurate at best, so this is the 'at best' for now until discs or scripts show up. Blank titles mean I couldn't find any mention. Any help with identifying the missing titles would be appreciated.

Three notes on the shows listed below:

1. The 42-06-01 program appears from both the title and description to be the same show as in the audition. Presumably it was redone with Ortega as Drummond.
2. The Blind Man's Bluff episode of 42-09-14 is circulating and is verified. Although no mention of a title is given in the 'next week' bit at the end, the desription given matches the newspaper descriptions of next week's show. Obviously some level of sponsorship started at some point during this part of the run.
3. David Goldin lists the 42-09-21 show as available also but so far I have not been able to find a copy of it.