Thanks Art but I read some reviews and don't think this one is for me.

Suspense_1943-06-15_Last_Night_wJosephKearns&Margo UPGRADE-4 Incl tax PS announcement at open.mp3
[You must be registered and logged in to see this link.]

Yes, thank you kdmarket. I was able to get it via hubiC. And thank you greybelt for also posting to hubiC! 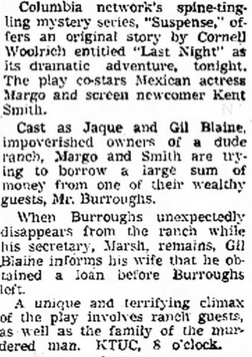 This copy of the recording finally has a full, unclipped open.

This broadcast has been documented as an unfortunate inspiration of serial killer George Hodel.
[You must be registered and logged in to see this link.]

David is also a musician. That affects the way he assesses sound and plans his recording strategy.

As most of us know in in Cobaltia, recording discs is hard work tempered by its being a labor of love. I hope you enjoy our discussion!

And... I'm glad that others have the patience and the diligence to care for and record from these discs -- because I don't!

There are many ways we can support OTRdom, and though I transferred many discs successfully in the mid-to-late-1970s, I learned the limits of my capabilities. Just listen to the way David talks about the process -- I'm so glad he's here.

THANKS AGAIN for our chat, David! 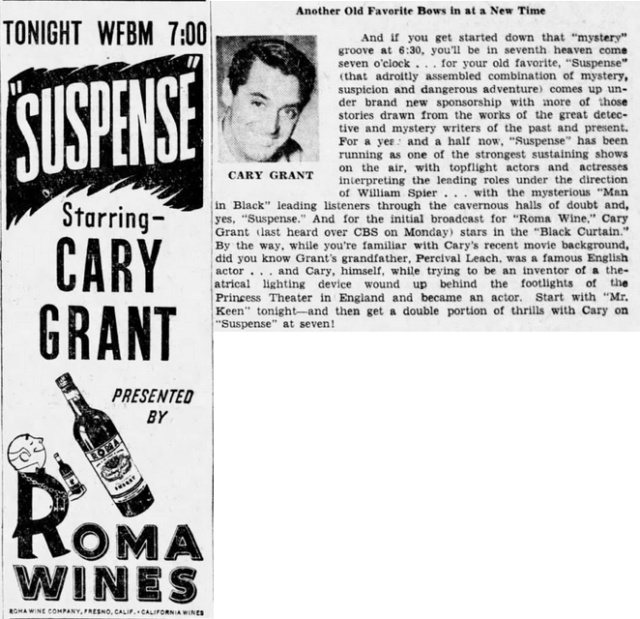 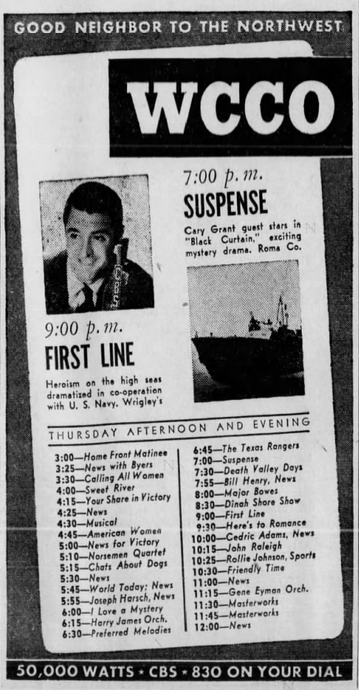 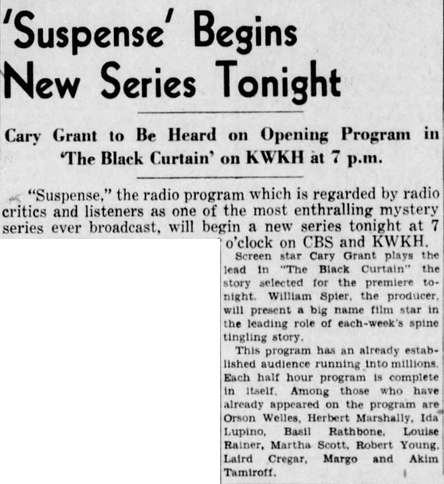 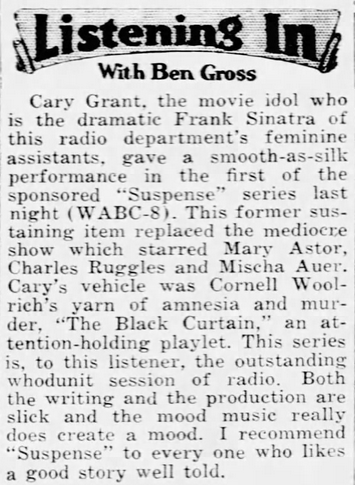 Today's Black Curtain episode has no internal clues that I can find. It's one of the few times in this December 1943 to September 1944 run where they say "next week" and not "Thursday" or "Monday." So I may have reviewed copies of this program that were East or West but we may never know for sure. Some of the internal differences, like changes in dialog, may never be caught, which is where some of the Cobaltian support has come in handy where aspects of the recordings are discovered by serendipity. 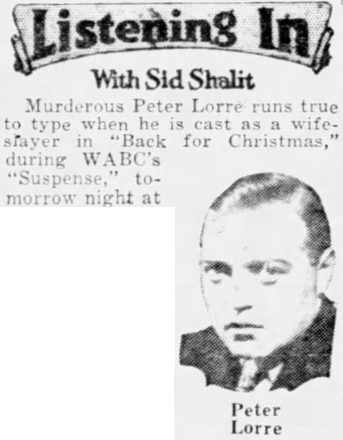 1943-12-23 Indianapolis IN News
This is an interesting one in that it mentions the special
stage used for Suspense. The show's big orchestra
could be distracting to the actors!

Lorre's appearance was a big deal! Roma probably created
an advertising allowance for its distributors to buy ads in
their local papers. It's rare to find this many ads in the
newspaper searches for a particular episode. Note that the
focus is on the star, not the story. 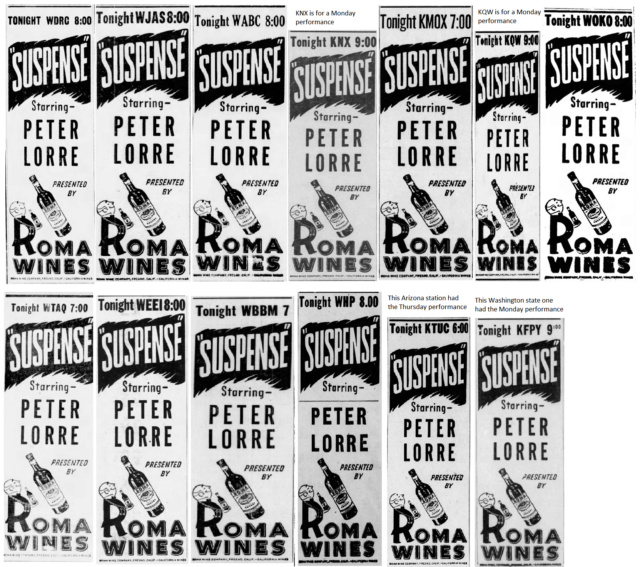 1943-12-24 NY Daily News
A review of the episode; note the mention of
the investment made in the music for Suspense 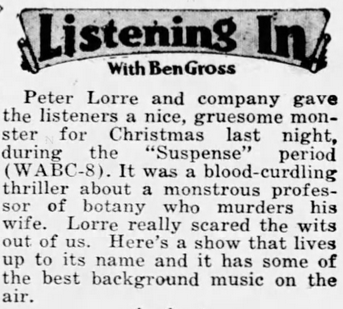 Today's episode is an upgrade of one of the different recordings of Dateline: Lisbon that make up an East Coast - West Coast pair. We just don't know which is which because I can't find an internal clue in the program, and the documentation of the recordings from the disc labels is long gone.
The spreadsheet tracking the pairs, identified and unidentified, is at [You must be registered and logged in to see this link.]

This day in Suspense history...
NOTHING!! It's amazing that even though the series was on the air for 20 years, there were no broadcasts on this day, Wednesday, December 11. There are 30 days in 2020 for which there was no Suspense broadcast for that date.

This was an interesting situation. Today's episode was a novel that was adapted to become a movie with our episode's stars...
1944-06-23 Rochester NY Democrat & Chronicle
John Loder signed to star in The Brighton Strangler movie 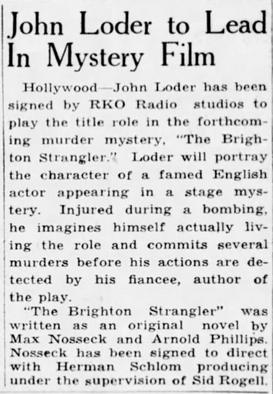 With the movie underway, the producers could get publicity by having Suspense adapt the script and present it as a radio play with the stars of the movie...
1944-12-21 Cincinnati OH Enquirer 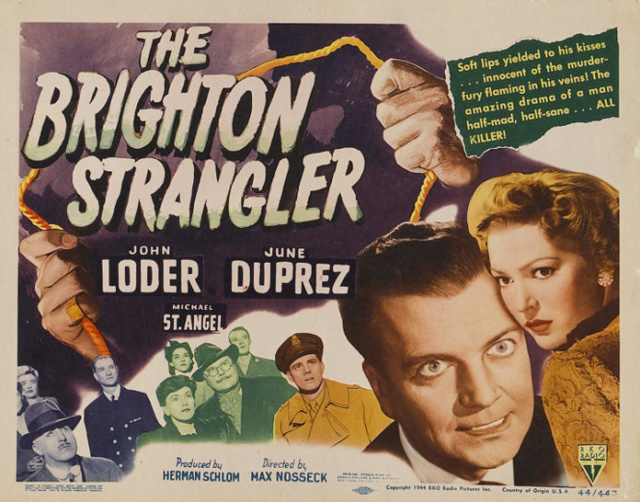 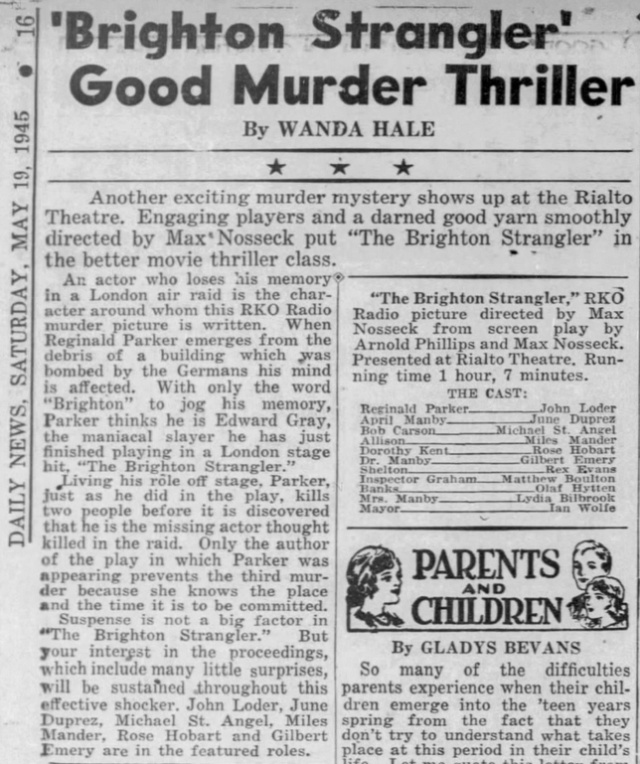 This is an upgrade of one of the three files we have of this episode. These are East and West but unidentified. One says "... the Roma Wine Company of Fresno, California..." and this one is "Roma Wines present..." There are two versions of the latter, this one, which is an upgrade, and another, that has a Boy Scouts of America promo at the end.

Today's episode is a "one-hit-wonder" script-writer hitting the grand slam in the bottom of the ninth on a first pitch 12-6 curveball in their first at-bat... since Little League. Well, maybe not so dramatic... first, here's the episode and the recordings...

This was the clipping that began the one-hit-wonder investigation...
1945-04-05 Minneapolis MN Star 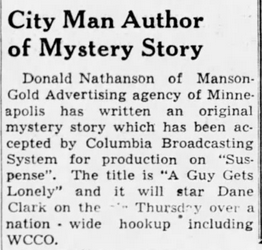 The writer's name is Donald Paul Nathanson, an advertising executive in Minneapolis. He submitted A Guy Gets Lonely for consideration, likely in 1944. He was about 30 years old at the time. Nathanson's specialty was radio advertising, how it was developed, targeted, negotiated, and placed. The ad agency he worked for in 1944, Manson-Gold, can be found on this page
[You must be registered and logged in to see this link.]

He was deeply knowledgeable about the medium and station operations. The best ad execs always know their advertising client, their products, their customers, but also the intricacies about how decisions are made by those who supply advertising space (newspapers, magazines, billboards, etc.) or time (broadcasting).

Five years earlier, he was in on the founding of Radio Showmanship magazine. Some copies are preserved online [You must be registered and logged in to see this link.] (individual issues are searchable but the collection is not searchable).

The magazine was offered to individual stations to buy exclusive subscriptions in their specific market for their customers and prospective advertisers in their marketing area. Articles would focus on the effectiveness of local advertising using a case study approach. In this way, station prospects would read about businesses like theirs that used radio advertising to be successful, and hope to replicate that in their town.

This was no newbie writer preparing this script... this was someone who already understood how well-constructed radio drama could engage and hold onto an audience. I think the script is pretty good in that regard... a trap, a crisis, hidden identity, evil perpetrator, false accusation, a whole range of devices used in many Suspense presentations by professional writers, assembled rather neatly.

* * * * * * * * * * * * * * * * * * * * * * * *
This little item in Radio Daily does not convey the importance of the event. Robert L. Richards had been Suspense editor on a freelance basis. He reviewed virtually all of the show's scripts during Spier's Hollywood tenure, and wrote quite a few himself. One of six scripts bears his name as author or adaptor, but the other five of six benefited from his editorial oversight. His tenure ended when Lewis took over the series, as Lewis liked getting into the small details and was his own editor. Richards ventured into television and motion pictures. He ended up on the Hollywood blacklist and moved to Mexico where he successfully took up carpentry and home construction to adjust for his limited writing opportunities.