This recording is the only one we have. I have found no portion of it that indicates east or west. There is no AFRS recording. There is sadness in the C3DS department with no project today and they need to find ways to look busy. There's only so many times you can clean microscope lenses or dissection tools or tabletops. (Someone... PLEASE!... clean out the break room fridge! Someone may be calling archaeologists to carbon-14 date some of the stuff that's in there!) They'll be okay... we're still in the 1946 broadcasts... there will be things to do soon...

This is a Suspense "one hit wonder" script. It was written by Lesley Raddatz, his only radio script. He became a well known media writer for TV Guide and Variety.

The AFRS version was posted in 2013 [You must be registered and logged in to see this link.]

This is a job for the C3DS! Does the AFRS version match this network version, or are there differences that identify it as derived from the missing network performance? Now that the desks are cleaned and the fridge has been fumigated (next is the breakroom microwave... please!... the folks in accounting are complaining and they're two floors up!), the C3DS is ready to charge ahead as the arbiters of dissimilarities!

Google Translate ruled today that the official motto of the C3DS has been designated as
Et identify docere ... "to identify and teach" ... what a marvelous contribution to Cobaltia
First will be a coat of arms, then comes t-shirts, coffee mugs, frisbees,...

These seem to be two distinct broadcasts:

Chasedad!! Thanks!!
Now we know that the AFRS was derived from the other broadcast.
That's spectacular!

that site is not working for me thanks

that site is not working for me  thanks

Here ya go, kdmarket: [You must be registered and logged in to see this link.]

For today's posting we have all three of the recordings available (EC/WC/AFRS). I can find nothing in the recordings to assign to which coast each belongs.

When Susan Hayward's character sings “I’ve Got You Under My Skin,” it is actually the then-Mrs.-Spier, performer Kay Thompson, uncredited. She was musical performance coach at MGM at he time.

The network version that is 2 seconds to network ID (in really nice sound) was posted last year. This is an IceDrive link to the file [You must be registered and logged in to see this link.]  Two seconds is not a big difference compared to "direct" but it is certainly there.

At 2:05 the direct to ID version has someone saying encore, encore after she sings I've Got You under My Skin. The 2 second version does not.

The AFRS version is from the direct to ID version. Someone says encore, encore.

The skeptical among us say they were rowdy and said "encore! encore!" after "refreshing" themselves and "rehydrating" in the break between the east and west broadcasts 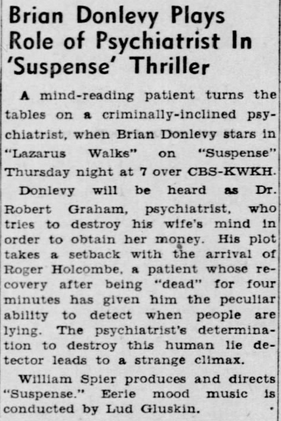 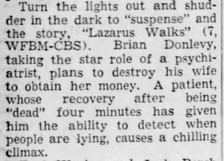 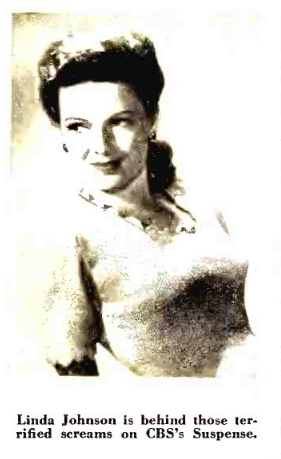 1946-10-27 Radio Life
The importance of music in Suspense is quite clear, and Spier's own musical
knowledge and abilities were among the reasons why it could play such an effective role.
His experience allowed a closer working relationship with the composers and musicians,
enabling him to describe what he envisioned, and specify what was needed in a clear
and precise manner, and for them to work in a more collegial way. 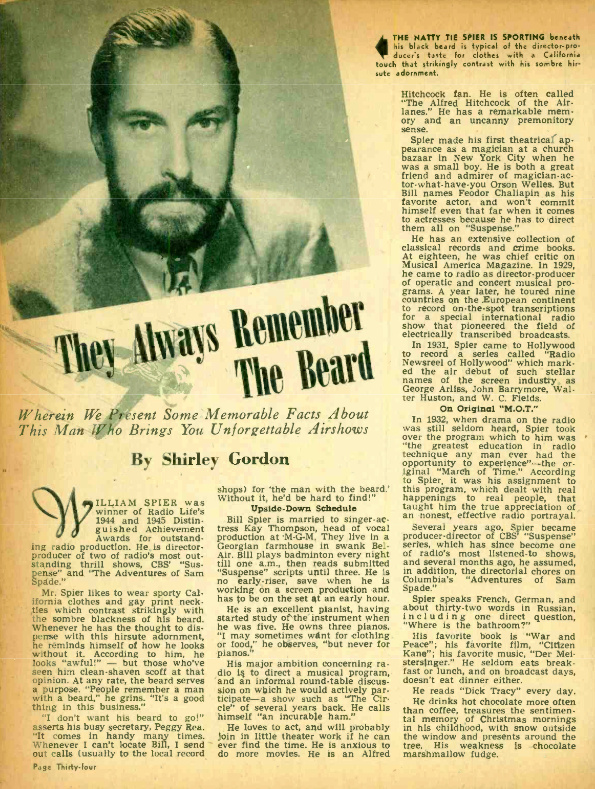 1946-1947 Winter CBS Program Book
The sales book for advertisers, agencies, and the CBS sales department shows
the four-hour difference in the starting times of the east and west broadcasts.
Suspense was heard at 8pm on the east coast, but 9pm on the west
(midnight eastern time). The separate broadcasts would end with the Roma Wines
cancellation a year later. "Biow Company" was the ad agency. The structure was
that Biow had the relationship with CBS and paid for the broadcast slot and time.
Schenley was the client of Biow and paid for the entire production, including the
agency commission. Spier was hired by Biow, not by CBS. Spier was an employee
of CBS only for the 1942 Summer series. This is why the programs always made
a point of stating "produced by William Spier."

The west version was posted two and a half years ago. There is a change in sound at about the 10 minute mark; I have not been able to find a replacement. I am not aware of any differences beyond the FBIiP&W tease. There is no AFRS version available; it would likely be number 180.
[You must be registered and logged in to see this link.]

This episode was originally planned for Dane Clark two months prior. Till the Day I Die was used instead on that date.
1946-09-15 Lincoln NB Star

There is a better sounding recording but it has a clipped opening. I have patched the opening onto the better sounding file. You know that I do not like this, but if I find a situation where it makes sense, I will do it... AND I will document it. Here are the two files...

Suspense_1946-11-14_The_One_Who_Got_Away_wHughCronyn (direct to ID) CLIPPED OPEN EXCELLENT SOUND.mp3
Clipped opening [You must be registered and logged in to see this link.]

This recording is the only one we have, with no indications of east or west that I have discerned. There is no AFRS recording.

Tree of Life with Morris was the originally scheduled script. That was held for the first broadcast of 1947 with Mark Stevens. There's a story behind the script that will be told once more when that upgrade is posted in a few days.

* * * * * * * * * * * * * * * * * * * *
An important milestone was reached with the Hehn collection yesterday: 50 unique pages at archive.org. They can be seen at [You must be registered and logged in to see this link.] where there are many upgrades and some new recordings. There's no Suspense there yet, but I've found 100+ upgrades that will be posted here as I work through them, and find a permanent home there as well.

I've filed the official request for them to recommend it as a special collection there, which can only be done when you hit the 50 mark. There will probably be over 300 pages when the project is done. Some of the disc work that I have sampled as it goes through the volunteers who record and who process has been outstanding. It's worth getting involved if you can.

There is only one complete broadcast recording of this in circulation. There are no identifiers that we have been able to find regarding the targeted coast. Is there another recording out there?

There is an abridged recording of this episode that was likely edited to fit on an LP record.

The episode has some interesting history. Cary Grant was intended guest star. A repeat of Black Curtain with Grant may have been originally planned according to Radio Life magazine, so it is a little unclear in this regard.The original title was "The House in Cypress Gardens"; the use of "Canyon" likely made it seem more remote and spooky rather than have it sound like the name of an apartment complex.

The script has "guest appearance" by detective named "Sam" played by Howard Duff, of course, a reference to Sam Spade, also produced by Spier and starring Duff. Calling him by only the first name meant that they avoided the requirement to make a payment to Dashiell Hammett for use of the character. 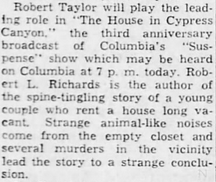 Other Suspense scripts Spier used in his 13 weeks producing the series were John Barbey and Son, Can't We Be Friends, and Bank Holiday.

Unless there was a name change for some of the others, the only The Clock script that would be used on Suspense was Search for Isabel

Today we know we have the east coast version of this script. It teases the FBIiP&W episode for those listeners. This is a Lucille Fletcher script.

From which broadcast is the AFRS version derived? Perhaps the C3DS can help us!

The AFRS version was posted six years ago and is at [You must be registered and logged in to see this link.] 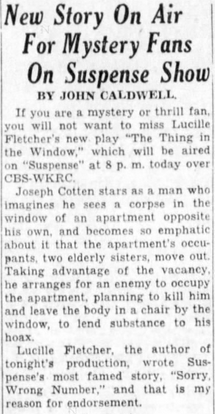